This week in Freeze-Frame Casting News: TVLine can confirm that 90210 grad AnnaLynne McCord indeed appears in the promo for the next episode of The CW’s Legends of Tomorrow.

In the episode “Stressed Western,” airing Sunday, June 27, McCord — who, Google just told me, has been known to date Legends star Dominic Purcell — guest-stars as a character named Irma Rose. Charming and alluring, Irma Rose catches the eye of many a cowboy, including Behrad, but as we’ll find out, she also harbors some dark secrets…

See the full photo below: 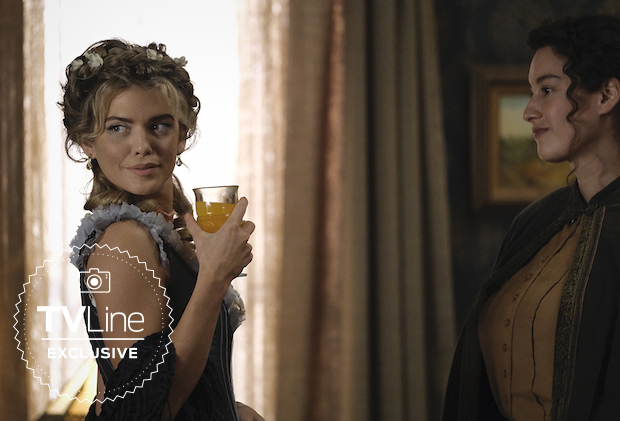 In “Stressed Western,” which was directed by and also guest-stars Arrowverse favorite David Ramsey (though not as John Diggle), the Legends find themselves looking to Nate to keep everything calm while in the Old West on a mission to find an alien. But after trying to keep things normal, Sara reveals her secret to Ava and the team, leaving them all shocked. Elsewhere, Constantine looks to Gary, who might have the answer to help his own problem; Spooner and Astra are forced to work together despite their clashing personalities, which ultimately helps push them to hone their powers; and Zari takes an unusual interest in Behrad’s personal life.