When Stephen King’s name is attached, things are bound to get bloody. (Note to the squeamish: You’ve been warned!)

Episode 4 of Lisey’s Story (now streaming on Apple TV+) came to a brutally violent head when Scott’s crazed stalker Jim Dooley finally made good on his multiple threats and arrived at Lisey’s front door. Merely minutes into the episode, he snuck into her home and suffocated her with a plastic bag. After tying her up, he headbutted her to the ground, before delivering over a dozen blows directly to her face. “Secrets, secrets are no fun. Secrets, secrets hurt someone,” he riddled like a maniac far off his rocker.

And that wasn’t even the worst of it. Armed with a pizza cutter, Jim continued to torture the poor woman, slice by excruciating slice.

One would think such horror would be something an actress would likely want to forget, but for Julianne Moore, the opposite is true.

“I remember absolutely everything!” the actress tells TVLine about filming the unhinged beating her character suffers. “[Director] Pablo [Larraín] hates violence, I don’t like it either, I don’t think Dane [DeHaan, who plays Jim] does… nobody really likes doing that kind of stuff. It’s so icky.” 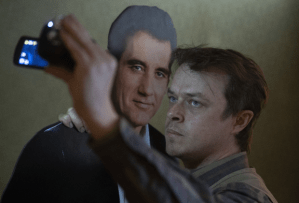 But when done right, even the “ickiest” of scenes can be artistically beautiful. Despite the extremely graphic nature of the attack, Moore says the sequence wasn’t particularly difficult to produce, mostly because of the way Larraín shot it.

“Pablo was trying to think about how to communicate this sequence and how best to play it, and he decided — and I think it’s really masterful — that you would never see the two characters, Lisey and Dane’s character, in a two-shot,” she says. “You see Dane’s side where he’s inflicting the violence, and then you see my side where I’m receiving this violence, but you never see any physical contact between the two. So in a sense, it leaves it up to the audience’s imagination to imagine what’s actually happening on contact.”

Pairing Larraín’s technique with Moore’s gut-wrenching performance, viewers can feel every pummel and every piece of torn flesh as the trauma Lisey endures snowballs. Thanks to the director’s specific framing of the sequence, our minds do fill in the gaps… that is until Lisey stares at herself in the mirror, brimmed with bruises, black eyes and cuts dripping with blood. And it was all because Jim sought the release of her late author husband’s unpublished work.

“It makes it more gruesome,” the actress very accurately states, “but also makes it almost like experimental filmmaking, in a sense. You’re left with a sensation, and not the reality of it, which I think was really beautifully done.”

Elsewhere in the episode, Lisey recalled a few key conversations after her attack. On one of Amanda’s more lucid days, the sisters discussed Scott’s family history of breaking from reality, showing once again the close relationship and commonalities Scott shared with Lisey’s ill sister. Then, in another flashback, Lisey remembered coming home to find a completely catatonic Scott sitting in his office chair. Later, he introduced her to the dream world (alternate reality?) he calls Boo’ya Moon, explaining his experiences there amid the pool’s mysteriously healing powers and the large, looming creature that resides there.

Show of hands: Was Lisey’s brutal attack hard for you to watch? And surely, you have questions — so do we! Let’s hash ’em out in the Comments below.