And now, the end is near. Well, near-ish. The Walking Dead won’t actually wrap its supersized final lap until 2022, but on Thursday, AMC released the first images from the long-running zombie drama’s 11th and last season.

Among the images are a glimpse inside the Commonwealth, the mega-community that’s key to the conclusion of Robert Kirkman’s comic-book series; a shot of nemeses Maggie and Negan as extremely unlikely teammates with a group that’s trying to read the writing on the wall (literally); and a picture of undead straphangers. We can only hope that they had exact change.

Ahead of Season 11’s August 22 premiere, AMC also released its official synopsis, which started off with a recap. “Previously on The Walking Dead, our survivors confronted past demons and combated new threats, with friendships and relationships suffering from the mounting collateral damage that is the apocalypse,” the network reminded us. “Alexandria is severely compromised, left a shell of the home it once was from the carnage and devastation [wrought] by the Whisperers. 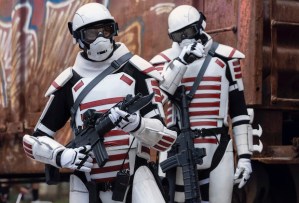 “Now all who live in Alexandria struggle to refortify it and feed its increasing number of residents, which include the survivors from the fall of the Kingdom and the burning of Hilltop — along with Maggie and her new group, the Wardens,” the logline continues. “Alexandria has more people than it can manage to feed and protect. Their situation is dire as tensions heat up over past events, and self-preservation rises to the surface within the ravaged walls.”

Not for nothing, but the Reapers are also out there posing a unique new threat. (Read more about the villains here.) All the while, our protagonists “must secure more food while they attempt to restore Alexandria before it collapses like countless other communities they have come across throughout the years. But where and how? More haggard and hungrier than ever before, they must dig deeper to find the effort and strength to safeguard the lives of their children, even if it means losing their own.”

Luckily, there is a light at the end of the tunnel: the Commonwealth — though cagey AMC still isn’t calling it that. All the network said was that “unbeknownst to those at Alexandria, Eugene, Ezekiel, Yumiko and Princess are still being held captive by mysterious soldiers who are members of a larger and unforthcoming group.”

How do you hope The Walking Dead ends? How do you fear it will end? Click on the gallery above to check out the new photos, then hit the comments.