If there’s one thing Generation fans should agree on, it’s that the Riley/Greta ‘ship must sail.

If you’ve been anxiously anticipating the next chapter in the girls’ budding will they/won’t they romance, brace yourselves: The first three episodes of Part 2 are now available to stream on HBO Max. While Chester explores his strong feelings for Bo, and Nathan continues to torture conservative mom Megan, the events from the hotel during their infamous class trip still weigh heavily on “Griley’s” hearts. (Or is it “Rileta”?) But a complicated love life isn’t the only drama bogging Riley down.

Below, Chase Sui Wonders talks to TVLine about Riley’s troubled family and love lives, her romantic misfire with Greta and what’s in store later this season. And yes, she even weighs in on the debate of the century: What is the better ‘ship name?

TVLINE | Can you tell me a bit about what Riley is going through during Part 2’s first episodes? I think it’s safe to say she’s hit a rough patch in many of her relationships, family and otherwise.
The first two episodes I shot, I was really excited because we always saw Riley in her quiet moments in the first block, but never got the full backstory. Playing the character of Riley is always a push and pull of the façade that she presents socially around her friends, and what lingers behind the mask. The backstory with Riley’s dad and his new girlfriend, and everything that her mom is going through, and the fact that Riley gets kicked out of her own room for her mom to exorcise this inner-child sort of demon, was really fun to play. It allowed me to uncover what makes Riley tick and what she’s trying to conceal and ultimately escape from.

On top of that, her relationship with Greta becomes this place of solace that she’s constantly grasping at. For Riley, Greta is the person who sees her.

TVLINE | Jumping into the pool fully clothed just to scream definitely shows where she’s at, too!
Totally. [Co-creator] Daniel [Barnz] and I talked a lot about a sort of Harold and Maude reference, this shock value of just trying to jolt your system. I don’t know if you remember, but the pilot ends with Riley jumping into the pool too, and it becomes her own sensory deprivation chamber where she can block out the world and release her emotions. 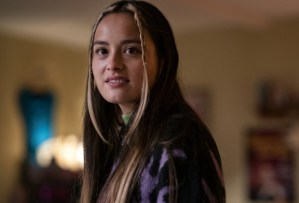 TVLINE | Super important question here: What’s the better ‘ship name: “Griley” or “Rileta”?
Oh my goodness, this has been such a source of tension. My heart splits in two every time I get asked this! I love “Griley,” but I feel like people will come for me for liking it, so I don’t know! Which one do you like better?

TVLINE | Excellent! This will inform the rest of my Generation coverage for the season, so thank you!
Thank god! [Laughs]

TVLINE | I want to get your take on what went down at the hotel in Part 1. Why do you think Greta rejected Riley’s advances, and why did Riley react the way she did with that rebound hookup?
It’s such a tragic and interesting love story because these two people are reaching for each other, but there’s a lack of communication and a failure to comprehend their feelings. At this age, or at any age, you don’t always have all the devices to understand yourself, let alone communicate it to the other person. They both have this burning feeling toward each other and inspire these emotions within each other, and yet they realize that they can’t connect.

I think from Riley’s point of view, she’s had this history of hookups, like you saw with Pablo in Episode 3, where she’s never really had a meaningful relationship where she’s connected on an emotional level. Greta brings out this side of Riley that’s deeply earnest, whereas in other relationships she puts on personas or can be performative. For Riley, it’s so exciting, but from Greta’s point of view, she might have the perspective that this is just another hookup for Riley, and it might be moving way too fast. They both have blinders on in a sense because they just completely misread each other’s signals. They just need to have a conversation.

TVLINE | Why do you think they’re so hesitant to hash it out?
The most vulnerable thing is to try to articulate what you’re feeling. It’s so confusing to even put words in your own brain, and so to have a conversation with a person that makes your insides explode is like laying you out on a surgical table with a scalpel. I think for both of them, it’s the most vulnerable they’ve ever felt with someone. I think that’s why the failure to communicate is so profound.

TVLINE | You have such great chemistry with Haley Sanchez [who plays Greta]. Did you both do anything to prepare, or did that all come naturally?
The beautiful thing about Haley is that we’re always joking around. She’s really funny. Despite a lot of our scenes being so heavy, we’re immediately cracking jokes in between takes. Because of the fact that we were filming during COVID, we were really in a bubble with everyone. I [recently] moved to L.A., so I didn’t have many friends [here], so we were able to hang out off-screen a lot too. That definitely helps. Being able to pull from real-life chemistry was really helpful.

TVLINE | What’s in store for Riley and “Rileta” for the rest of Season 1?
Episode 14 is an episode that’s from Riley’s point of view and situates you in her brain, essentially. What I love about this second block is each of the episodes feels like a little film. Deep-diving into Riley’s home life is something you should definitely expect. The way Daniel and [co-creator] Zelda [Barnz] approached mental health in these episodes is really special and very specific and authentic. It feels fully immersive in terms of how they depict Riley’s specific type of anxiety. I’m excited for people to see that.

In terms of the Greta and Riley dynamic, people can expect a definite escalation in terms of their relationship. They’re finally able to have a discussion where they’re able to truly see each other’s intentions.

TVLINE | Should the show get picked up for Season 2, what do you hope for Riley’s future?
I hope that she continues to break down the barriers she’s built around her. So much of playing Riley was building up these layers of steel around her to protect her from her pain and trauma. The ending of this block sets her up to break free of that and loosen some of the armor she’s built up. And I hope she figures her love life out!