One of the most widely discussed aspects of Disney+’s The Falcon and the Winter Soldier has been the extent of Sam and Bucky’s bromance.

Over the course of six episodes, we watched the reluctant partners bicker… roll intertwined in a field of grass for comedic effect, confide in each other… sit down for an impromptu couples therapy session… and share laughs while their relationship evolved from gentle hostility to genuine friendship.

Their unlikely partnership is undeniably entertaining, yet some have interpreted those intense arguments — including one about the “Big Three” villains — as indicative of sexual attraction. 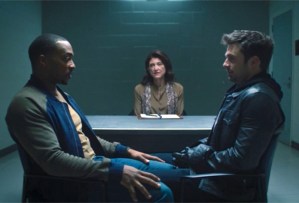 It’s a familiar topic for Mackie, who in the Black Mirror episode “Striking Vipers” co-starred with Yahya Abdul-Mateen II as best friends who engage in virtual sex during a VR fighting game. But in an interview with Variety, Mackie rejected the notion of Falcon and Winter Soldier‘s Sam and Bucky sharing anything more than a bromance.

“So many things are twisted and convoluted. There’s so many things that people latch on to with their own devices to make themselves relevant and rational,” he suggested. “The idea of two guys being friends and loving each other in 2021 is a problem because of the exploitation of homosexuality.

“It used to be guys can be friends, we can hang out, and it was cool,” he continued. “You can’t do that anymore, because something as pure and beautiful as homosexuality has been exploited by people who are trying to rationalize themselves.”

How Disney+ TV Series Have Changed the MCU

Mackie noted how important it is to him as an actor to play a sensitive masculine figure. “There’s nothing more masculine than being a superhero and flying around and beating people up,” he said. “But there’s nothing more sensitive than having emotional conversations and a kindred spirit friendship with someone that you care about and love.”

Mackie described Sam’s relationship with Steve Rogers (played in the MCU by Chris Evans) as one in which they “admired, appreciated, and loved” each other, whereas Sam and Bucky had to learn to accept and love one another. “It’s literally just two guys who have each other’s backs,” he said.

What is your interpretation of Sam and Bucky’s relationship? How do you feel about Anthony Mackie’s comments? Let us know your thoughts below.