When it comes to Elite‘s many couples, marchioness Carla and the working-class Samuel might be the Netflix drama’s most unlikeliest pairing. But that doesn’t stop Samu from attempting to win back Carla before she departs for London in a short story released on Thursday, ahead of Season 4’s premiere on Friday.

Like a scene out of a rom-com, Samuel rushes to the airport and tries (and fails) to get the guard to let him through security without a boarding pass — “This is the airport, not the set of a Julia Roberts movie,” the guard scoffs — so Samuel buys the cheapest plane ticket available (which is still 400 Euros). When he finds Carla at her gate, he tries to convince her to stay and try at a relationship again, but Carla is not swayed by his so-called romantic gesture and says he better be gone when she comes out of the restroom. And when he is, she goes to look for him at his Lisbon gate, which Samuel sees as a good sign. Still, Carla maintains that they already gave it a try and it didn’t work out, so they’re not meant to be. Then when her flight is delayed by seven hours, Samuel talks her into spending them with him. He make her a deal: He won’t try to convince her to stay, and she’ll end up telling him to ask her to stay.

So they head over to Samuel’s apartment, where they play a sexy mashup of Truth or Dare and a drinking game. Carla asks how Samuel envisions his future (“I see my future with you,” he replies), while Carla refuses to answer why she asked about the future, opting instead to take off an item of clothing or drink. Samuel, in turn, doesn’t answer her question about how they could make it work. And then Carla just wants to get down to business (“I want to leave here smelling of you, tasting of you, full of you. I want to take that with me”), because let’s be honest, their relationship is mostly based on sex, which they have plenty of following their game. 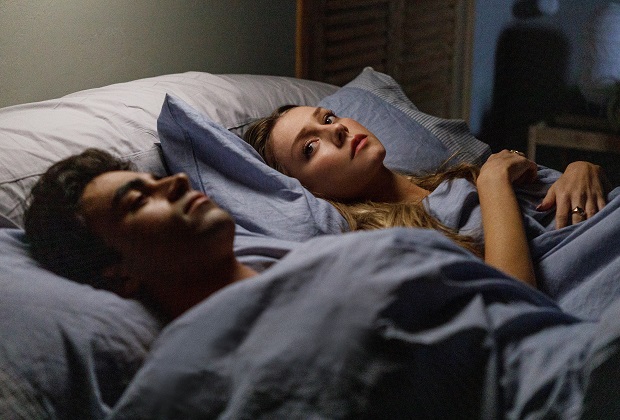 In the afterglow, Samuel asks Carla to postpone her trip. “I could spend my whole life asking you to take the next flight,” he says. And every morning, she’ll decide whether to stay or not. “I don’t care if our story starts again every seven hours,” he adds.

After initially calling their tryst a mistake (and insulting Samuel’s sexual abilities), Carla admits that she doesn’t want to leave. “Ask me to stay,” she says. (Hey, that is Pacey Witter’s line!) And so she does stay, shacking up with Samuel, who asks her every day if she wants to take the next flight. “You know I don’t,” she replies.

But after a week, the honeymoon period starts to wear off, as Samuel prods Carla about the fact that she hasn’t told her parents that she left her life for a waiter. And when Carla shows up at Samuel’s potential new job, they end up having an argument. She thinks he deserves better than his job, and he won’t let her support him, financially.

When Samuel doesn’t find Carla at home, he leaves her a series of messages about how they’re great in the little bubble that is his bed, but in the real world, not so much. “I am the problem. I’ll always see myself as being beneath you,” he confesses.

But Carla just went to her parents’ place to have the maid do her laundry and returns with sushi. Somehow, Samuel is able to erase the voice messages from his own phone, so Carla doesn’t hear them, but she has a pretty good idea of what he said. In the middle of the night, she leaves her own surprisingly emotional message for Samuel.

“I know you are the truest thing that’s happened to me. And I also know it won’t work out,” she says, adding that she’s “happy we ended this way. I don’t regret missing seven planes. I don’t regret a thing… Thank you for loving this fickle marchioness and for melting her icy shell. We are not meant to be, but I will love you forever.”

And with that, Carla leaves the apartment as Samuel stirs in bed and finds her place besides him empty. He grabs his phone and plays her message.

Elite fans, what did you think of Samuel and Carla’s new ending? Was it more realistic and honest to their relationship? Or a bit too schmoopy? Hit the comments!