After waiting for months to see if Gary survived a crazed Jasmine’s shooting spree, fans of Tyler Perry‘s Sistas finally got their answer Wednesday night.

Gary is alive! Turns out he replaced the bullets in his ex-wife Jasmine’s gun a long time ago with rubber ones because he was afraid that she would harm him or herself. Good thinking, Gary, but is that even a thing? The one downside of rubber bullets, Gary said, is that they hurt like hell. Despite his pain, Gary left Andi at her place to go pick up his son from Jasmine’s mother’s house and take him to his mom’s house. So many grandmothers, so little time.

Andi, who is his fiancée, wanted to tag along, but Gary warned against it because apparently, Jasmine’s family is just as insane as she is, and he worried that they might try and do something to Andi. Man, Gary. You barely survived Jasmine. Maybe you should try and lie down for a while. Instead, Gary went to work the next day, stopped by the police station and gave a statement, and even arranged a modeling gig for Andi to show off her cheekbones. She does have nice cheekbones. 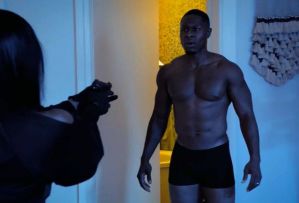 Kudos to Andi for getting her locks changed — so that’s how Jasmine got in? — but perhaps Gary and Andi should be careful until Jasmine is behind bars for good. As for the shooting, one tell-tale sign that Gary was still alive during last week’s Season 3 opener was the odd way the cops behaved when Andi asked questions.

They also wouldn’t let Andi go back into her bedroom or even use her phone. That said, that one cop sure treated Andi like a suspect, but perhaps that is just how the cops roll sometimes. Gary is achy but alive, and even with fuzzy details like these, that’s all that matters.

Elsewhere in the episode, Sabrina avoided Jacobi like the plague because his, um, private parts are too large, causing Maurice to give him the nickname “Girth Brooks.” (Hilarious.) Maurice almost busted a thief who stole one of Calvin’s checks, but the guy got away when Jacobi walked into work, and now Calvin has to come to the bank to get things straightened out. Awkward.

Karen and Aaron and their rhyming names, meanwhile, still can’t get it right, but at least Aaron knows he has a drinking problem. Hopefully, he’ll get the help he needs. Andi and Karen made up, but Andi didn’t tell her about the shooting. And Danni is still hiding from her landlord and giving Zac and Gary the blues.

What did you think of Gary’s shooting and the fact that he’s still alive? Grade the plot twist in our poll, and drop a comment below.