The following post contains spoilers for Episode 2 of Loki. Proceed with caution!

Loki‘s second outing introduced the God of Mischief like we’ve never seen him — or rather, her — before.

Episode 2, which dropped on Disney+ Wednesday, found Loki (Tom Hiddleston) and Agent Mobius (Owen Wilson) teaming up to sniff out the Loki variant who’s been committing crimes all over the Sacred Timeline. The variant’s hideout turned out to be a superstore called Roxxcart, located in Haven Hills, Alabama in the year 2050 — and when Loki came face-to-face with the variant at last, it was revealed to be a female version of Loki, played by English actress Sophia Di Martino (Casualty).

Though she’s merely listed as “The Variant” in Loki‘s closing credits, it seems safe to assume that Di Martino’s character is Lady Loki, an incarnation of the roguish Asgardian who has previously appeared in Marvel’s comics. (Other fan speculation, however, theorizes that the variant is actually Sylvie Lushton, a comic book character who goes by the alias Enchantress and also has ties to Loki and Asgard.)

Head writer Michael Waldron won’t give away much regarding the arrival of Di Martino’s character, though he does hint that her introduction will “reshuffle the deck of the show” in Episode 3 and beyond: “We want to keep building the thrill ride, and that felt like the right time to blow another big batch of dynamite,” he offers in the video Q&A embedded above. 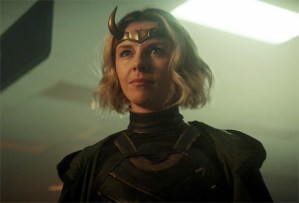 And Lady Loki’s entrance was quite explosive. As Loki confronted this enigmatic variant of himself, who at first took the form of different Roxxcart employees and customers, Loki theorized that the variant planned to blow up the superstore after luring Loki and the TVA agents there as a trap. But those objects on the Roxxcart shelves weren’t bombs: They were reset charges, which the variant has been swiping from TVA agents at each of her crime scenes.

The charges are normally used to “prune” any new branches of the Sacred Timeline, wiping any evidence that the timeline was destabilized in the first place — but in this case, Lady Loki used her accrued collection of reset charges to open countless new portals, creating dozens of unexpected branches on the timeline. What’s more, after Lady Loki went through one of the time doors, Loki followed her across the threshold, abandoning Mobius and the other TVA agents in the process.

“[Mobius] feels betrayed,” Wilson tells us of Loki’s decision to bail on the TVA. “Having studied [Loki’s] life and knowing everything, you feel a little bit foolish also, because you can’t ever really be surprised that the God of Mischief would be up to something.”

Hiddleston, though, counters that the decision wasn’t an easy one for Loki to make, adding that “certainly there’s conflict” for the character as he ponders whether to pass through that time door.

“Mobius is someone who, perhaps for the first time in [Loki’s] life, he thinks he might be able to trust, and perhaps trusts him, and he doesn’t want to betray that trust,” Hiddleston explains. “But at the same time, he has to see what’s going on. He can’t help himself but follow, because it’s too strange and provokes so much curiosity within him.”

Press PLAY above to hear Hiddleston, Wilson and Waldron unpack more of Episode 2, then drop a comment with your own thoughts and theories!