Paramount+ has revealed additional voice cast members — and a first look at the characters they will play — in the animated Star Trek: Prodigy kids’ series.

The premise: In the year 2383, after the events of Star Trek: Voyager, a motley crew of teenage aliens must learn to work together to use an abandoned starship and search for adventure in the Delta Quadrant. As previously announced, Voyager captain Kate Mulgrew is set to reprise her role as Kathryn Janeway, who here will serve as the starship’s built-in emergency training hologram.

New to the Star Trek: Prodigy voice cast are:

Jason Mantzoukas (Brooklyn Nine-Nine, Big Mouth) as Jankom Pog, a 16-year-old Tellarite. (Tellarites are known to relish an argument, and Jankom is no different. Regardless of opinion, he will always play “devil’s advocate” for the sake of hearing all sides.)

Ella Purnell (Sweetbitter, Army of the Dead) as Gwyn, a 17-year-old Vau N’Akat who was raised on her father’s bleak mining planet and grew up dreaming to explore the stars. 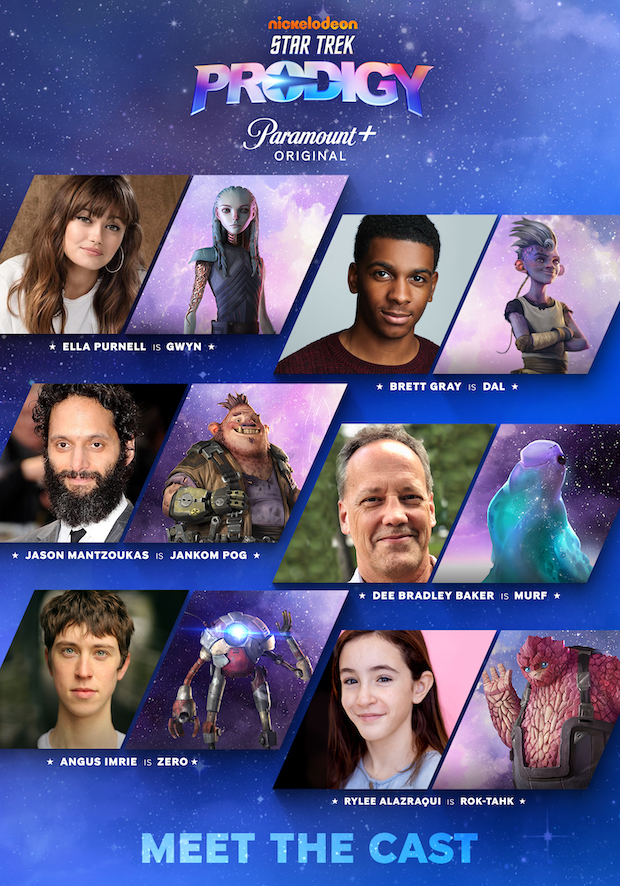 Dee Bradley Baker (SpongeBob Squarepants, Star Wars: The Bad Batch) as Murf, whose age and species is unknown but who is an endearing, indestructible blob with curiously good timing and an insatiable appetite for ship parts.

Brett Gray (On My Block) as Dal, who at age 17 and of an unknown species fancies himself a maverick who, even in the toughest times, holds strong onto his unwavering hope.

Angus Imrie (The Crown, Kingdom) as Zero, who is a Medusan — aka a noncorporeal, genderless, energy-based lifeform. Since others would go mad at the sight of their true self, Zero wears a containment suit they made themselves to protect others.

Rylee Alazraqui (Doug Unplugs, Summer Camp IsIand) as Rok-Tahk, a Brikar and an unusually bright 8-year-old girl. Rok is a bit shy, but not when it comes to her love for animals.

Produced by the Nickelodeon Animation Studio and CBS Studios, Star Trek: Prodigy will premiere in the U.S. later this year.