ABC revived The Dating Game this Monday night, but with a celebrity twist. Is the tweaked redo worthy of a big dating game kiss?

As I did with the new incarnations of Card Sharks, Name That Tune and surely others, I as a man of a certain age am here to compare The Celebrity Dating Game to its original incarnation, which most famously (in my opinion) was hosted in the ’70s by Jim Lange. Here, as host, we get Zooey Deschanel… and Michael Bolton, because, best I can surmise, they needed a way to drop clues about the mystery celeb, and an ABC intern chimed in, “Hey, what about famous songs with altered lyrics?”

For example, Cher’s “I Found Someone,” but regarding mystery celeb Hannah Brown:

So to answer the question raised by most every promo — “Why is Michael Bolton here?” — he gets off about one (scripted?) quip per game, and also sings the clue-dropping tune. Period. (I leave it to you to debate if he is as clumsily underused as Name That Tune‘s Randy Jackson.) 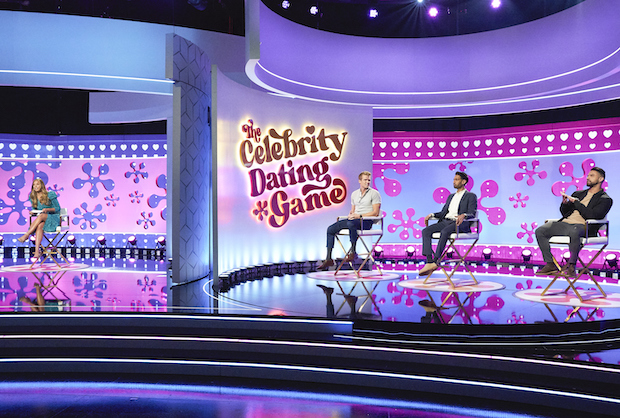 Deschanel is her affable self and does her best to liven up the proceedings, which tend to be much more stilted than the free-lovin’ original version of The Dating Game, which featured regular folk with no public persona to protect. It will be interesting to see when a live-r wire like Iggy Azalea, for example, grills three possible suitors in an upcoming game.

The set is modern-day glossy but aims to evoke the groovy ’70s with its flower motif, and the layout is identical — save for the fact that the three bachelors (during the COVID-safer time when this was taped) are seated a half-mile apart, and I couldn’t help but think that affected the “bro vs. bro vs. bro” dynamic a bit. After all, it’s hard to be noticed scoffing at your rival’s lame answer from so far away! 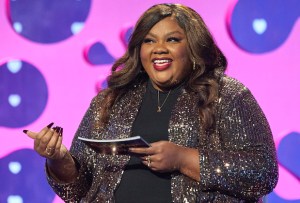 There was also the sense, during the Hannah Brown game, that all three bachelors were straight out of Central Casting (one was an awkward model, another a stand-up comic who had zero jokes). The guys vying for mystery celeb Nicole Byer were more authentic — No. 1, perhaps too much so, given how he likened the feeling of love to taking a good “dump” in the morning (followed by a shower, he futilely stressed).

The game play is split up into three rounds of questions from the mystery celeb, the first of which leads to the Bolton tune. Along the way, the contestants are occasionally cued to venture a guess at the mystery celeb’s identity. But with so much inherent “drama” about who said celeb is, it’s kind of weird how, once she or he is revealed to their chosen date…  the episode just ends. (Following the throwing of a big Dating Game kiss, of course.)

What did you think of ABC’s The Celebrity Dating Game?