If you watched Episode 6 of Apple TV+’s Mythic Quest and found yourself thinking that actor Josh Brener nailed F. Murray Abraham’s mannerisms so succinctly that he could be his progeny, you’re not alone.

The Silicon Valley alum guest-starred as a young C.W. Longbottom in the Season 2 flashback episode titled “Backstory!” and did such a convincing job that even Abraham himself says he learned more about the character because of Brener.

“That’s a hell of a thing to find out about someone that I created,” Abraham says of Brener’s turn as a younger version of his character during a recent FYC panel. “But he did inform me. He’s this wonderful actor, and I got in touch with him after to let him know just how wonderful he was. Aside from the script being so good, the other two actors [Shelley Hennig and Michael Cassidy] were remarkable, too.”

“When you pair that with this week’s episode, you will see [Cassidy], who played Peter, is a real facsimile of William Hurt,” Abraham says about the following installment, “Peter,” which premiered this Friday. “It’s a remarkable performance, but it was also a terrific segment.” 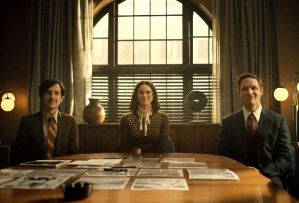 Co-written by Chernobyl scribe Craig Mazin, who also guest-starred as an ancestor of sorts to his recurring Mythic Quest character Lou, “Backstory!” rewinds to C.W.’s early years as a struggling writer in 1970s Los Angeles. When C.W. joins the staff at Amazing Stories, a science fiction magazine, he befriends his fellow copy editors/aspiring writers Peter (Cassidy) and A.E. Goldsmith (Hennig). Things get complicated when C.W. develops romantic feelings for A.E., especially because she prefers Peter. In Episode 7, viewers will see what happens to C.W. and Peter’s friendship in the present.

Mythic Quest co-creator Rob McElhenney, who also executive-produces and stars as Ian, says Brener’s thoughtful performance as a brilliant but emotionally stunted C.W. helped the workplace comedy travel back in time and explain how he became the way he is.

“We had a lot of success with last year’s episode ‘A Dark Quiet Death,’ where we looked back 20 years, and we wanted to do something again in that space to keep trying new things,” McElhenney explains. “We thought it was a great opportunity to take a character that we already knew, who had a very rich backstory, and C.W. fit that description. And Josh was incredible.”

“When I saw his audition, I thought, ‘Oh, that’s Big Head from Silicon Valley,’ and 30 seconds in, I grabbed Megan [Ganz] and David [Hornsby] because he was incredible,” McElhenney recalls of his consultation with his fellow EPs. “I said, ‘Have you seen Josh? Am I crazy, or is he really this good?’ I immediately called [Silicon Valley EP] Alec Berg. I’ve been friends with him for years, and he said, ‘If you can hire that guy, hire him right now. He’s amazing.’ And sure enough, that’s what we did, and Josh was absolutely phenomenal.”