Rebel‘s eponymous heroine is a hot mess, and the ABC drama’s two-hour finale reaffirmed exactly why that’s one of her best attributes.

With reporters camped outside because of her arrest for drunk and disorderly conduct, Rebel’s home was in total disarray. To make matters worse, their expert witness Cartson was having a nervous breakdown and in no condition to testify. Plus, Ziggy, who was still upset with Grady for having a secret love child, lashed out at reporters in a rant that went viral.

Things were no better in court as Cruz struggled against Stonemore’s ruthless lawyers. Benji discredited one of his witnesses on the stand and made another come off as wholly unlikeable during cross examination. Benji then handed the reigns to Rebel’s daughter Cassidy, who took shots at Misha’s credibility by exposing her affair with a married colleague—private information  that Nathaniel told Cassidy in confidence while contemplating his relationship. 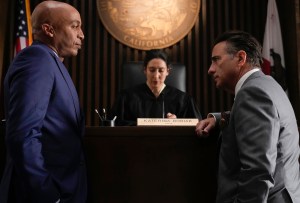 Stonemore’s tactics were even shadier outside the courtroom. They paid Ziggy’s boyfriend Sean $20,000 to deceive Rebel into thinking Ziggy overdosed and was in the hospital. Plus, Cartson mysteriously disappeared and his husband was found drugged on the floor after the cops who were watching them were called away for an emergency. Both were false alarms: Ziggy had been in court the whole time, and Carston left a voicemail with cryptic clues that led Rebel and Lana to a random storage unit. After digging through mountains of junk, they found a jump drive and the key to winning their case.

Back in court, Cruz stalled for time by calling Nathaniel to the stand to explain conception in excruciating detail. Meanwhile, Lana and Rebel rushed the jump drive to Misha, who couldn’t make sense of the documents enclosed. Why was there evidence that the valves were tested on humans with healthy hearts? Rebel quickly pieced things together and made a mad dash to the Attorney General’s office with Lana in tow.

Elsewhere, Grady tried to get Ziggy to hash things out with her boyfriend Sean, who’d been caught trying to flee to Las Vegas. He only took the money so he could help his younger brother who was stuck with an awful foster mother. The trio then dropped by said woman’s house and smuggled the young boy out without being detected.

Cruz again tried to stall for more time and nearly reached the end of his rope when Rebel burst through the doors with some important and disturbing information: Stonemore tested their heart valves on healthy inmates in exchange for recommendations for early release. In the wake of this revelation, Cruz left a final settlement offer on the table—$600 million plus covered costs to remove the valve and a guarantee to take their faulty product off the market. Stonemore, of course, caved.

The mood at Rebel’s house shifted in contrast to the start of the trial. Everyone was happy and celebrating the big win. Ziggy’s college fund was safe, Sean’s brother was now going to live with them, Misha and Nathaniel made up after Nathaniel told her secret, and Nathaniel and Misha even buried the hatchet following the courtroom betrayal. Plus, Cassidy found a new case that she, Rebel and Benji can all work on together. Cheers.

What did you think of that hopeful ending? Are you upset that Rebel was cancelled? Grade the finale and the season as a whole below, and let us know your thoughts in the comments.