The following recap of the Manifest Season 3 finale contains an entire luggage carousel full of spoilers.

Manifest‘s Season 3 finale ended with a series of shockers, both of a personal and supernatural nature — meaning, many fans will surely be screaming if NBC does not renew the series for at least one more season.

To recap some of the biggest, final moments: 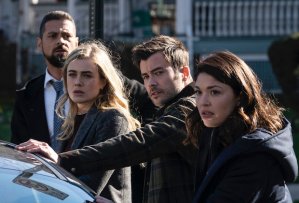 Starting small and personal…. A showdown with Eagan, who with another 828er found himself unexpectedly holding Vance’s son hostage, amped up all kinds of tension between Michaela and Jared — especially once the latter realized that Saanvi was involved in the death of the Major/Sarah’s mother. As Jared and Mick had it out on the street where Vance lives, Zeke clearly picked up on lingering feelings, after which he told his wife, “We need to talk…” — and she sheepishly concurred. 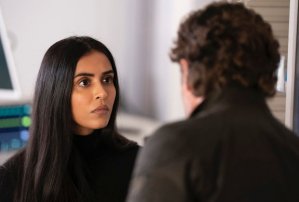 With Vance tending to said family crisis, Ben and Saanvi led a U.S. Coast Guard vessel out into the ocean, where they aimed to return the purloined tail fin to its proper resting place — hoping that doing so would bring back Cal, who had mysteriously vanished upon insisting on touching the tail fin at Eureka. The captain got skittish, sailing into a violent storm of dark clouds, and with the blessing of those ranking higher than Vance started turning around. Saanvi rushed onto the deck to unshackle the tail fin, but as it fell into the drink, she toppled with it. Saanvi was almost pinned down by the sinking tail fin, but Ben dove in to save her. Afterwards, they both got sucked into a calling where, aboard Flight 828, they saw Cal and asked him 1) where he was and 2) how to stop whatever it is he’s afraid of — but all Cal would say is, “This is the way it has to be.” Michaela, in the same calling, meanwhile solved the mystery of which 828er is out to do them harm — and it is Angelina!

Speaking of the devil…. Angelina snuck into the Stone home and grabbed her “guardian angel” aka  baby Eden, to conduct a creepy af “baptism” ceremony in a bathtub. What viewers came to realize is that, upon startling Grace with her presence, Angelina brutally stabbed Eden’s mother, leaving her for dead on the bedroom floor before absconding with the tot. 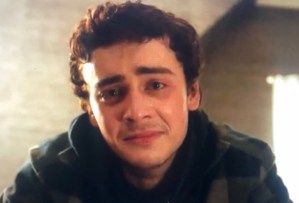 Who would rush to a bloody Grace’s side? Cal — who had mysteriously vanished earlier — apparently was returned to his bedroom as the tail fin returned to the ocean floor. But with the season’s final moments, we saw that the Cal who cradled his dying mother was suddenly 17 years old, the same age as twin sister Olive, and is now played by Ty Doran (American Crime)! “Take care of each other,” Grace said to her “sweet, sweet boy.” And teen Cal comforted her (but maybe shoulda dialed 911 at the same time??), saying, “It’s OK…. I know what we need to do now.” 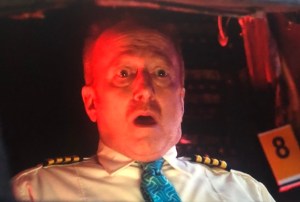 But wait, there’s more! Because in a final final scene, Dr. Gupta is clocking out for the night at Eureka when who appears in the salvaged plane’s cockpit but Captain Daly! But he no sooner lets out a gasp, when the whole plane vanishes from the research lab with a flash.

Which Manifest finale twist shocked you most? And what did you think of this season overall, Noah’s Ark and all?