Lois and Jonathan once again found themselves in harm’s way on Tuesday’s Superman & Lois, but it was no “stranger” who held them by the throat. This time, it was an enemy much closer to home.

Unbeknownst to his wife, Kyle enrolled in Morgan Edge’s alleged self-improvement course, something the viewers discovered when he tried to kill Lois and Jonathan after the school talent show. And in their own barn, no less. Of course, Kyle had no memory of that — nor did he recall his embarrassingly brief scuffle with Superman — when he returned home later that night. Lana, however, knows exactly what was going on.

Meanwhile, Clark brought Jordan to the Fortress of Solitude to literally burn the Kryptonite out of his system; Lois patched things up with Sam, whom she temporarily banned from her home for infecting her son and husband; and Morgan Edge revealed a potentially game-changing secret. 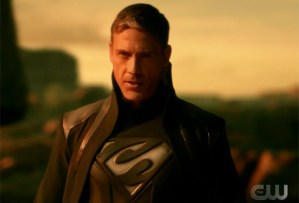 After summoning Superman to his side in the episode’s final moments, Edge told him, “I think it’s time you learned the truth about who I am and where I’m really from… brother.” (Gasp!)

Below, Erik Valdez (aka Kyle Cushing) breaks down the episode’s biggest moments:

TVLINE | Let’s start with the most important thing… Do you really know how to play guitar?
[Laughs] I do! Not well, but well enough to do what we played on the show. I’m not dropping any albums anytime soon, at least not with me on guitar.

TVLINE | Getting to perform on stage with your TV daughter must have been a nice bonding experience.
Oh, it was awesome. Leading up to that, Inde [Navarrette] came over to my house a couple of times to rehearse. I don’t want to speak too much for her on this, but she really does have a bit of stage fright when it comes to that. That plays through in the character, but it’s also in her. I have video of us rehearsing in my living room that I’ll post after the episode airs. It was fun helping her through it. I felt like an actual father to her. And we have a lot of those life-imitating-art moments, because she just turned 20 and I’m almost 42, so the harsh reality is that she really could be my daughter. Our interaction after the performance, with that hug on the side of the stage, was also all genuine. The script said she was supposed to stay at the mic, but our director Eric [Dean Seaton] would just let the camera roll, sometimes longer than we quite grasped as to why. But there was always a reason. He would catch little moments like that. He’s fantastic. She ran to the side of the stage and jumped up and gave me a hug. We’re not even lit properly for that shot, since it wasn’t planned, but they kept it in there because it was such a great moment.

TVLINE | And then came… everything after the concert. Were you told ahead of time that Kyle would be going down this dark path?
A little bit. I spoke with [showrunner Todd Helbing] early on in the season where certain things were going, but then some things changed. So while reading Episode 9 for the first time, I was aware of what was going to happen, but I had no idea how it was going to happen. I thought it was done really well. Knowing this was coming, I also knew that the audience would either grow to hate Kyle or you could really start to feel sympathetic for him. The way it plays out moving forward, I think it’ll be the latter.

TVLINE | How did it feel to film the scene where Kyle tries to kill Lois and Jonathan? Talk about switching up your dynamic with those co-stars.
[Laughs] A crazy different dynamic. I’m a pretty physical person. I’ve always been pretty athletic, I love to do stuff outdoors and I’m a bit of an adrenaline junkie. So when it came time to do this, my first question was: “Whatever stunts are involved, can I do them myself?” Rob Hayter — our stunt coordinator, who’s this low-key human being who could also kill you in two seconds — just got this little smirk on his face. For the moment Superman comes through and sends Kyle flying through the back of the barn, they put me up on this rig, strapped me in and it was a fun little ride. It’s almost like riding a zip line in reverse, and it happens really quickly. It just jerks you up and back. It was fun. I feel like a kid when I get to do stuff like that.

TVLINE | Getting to fight Superman was probably also a career highlight.
It was, though it wasn’t much of a fight, to be honest. He pretty much kicked my ass. But that’s how Superman rolls! And if anyone’s going to take you out, to be able to say that it was Superman is pretty awesome.

TVLINE | I know he doesn’t remember what he did, but is this the beginning of a journey of discovery for him?
Over the course of the next few episodes, things will be pieced together a little bit. There will be some clarity there. But as of now, Kyle doesn’t know what’s happening to him. There’s no part of Kyle, other than the host body, when he’s turned. None of him exists in those moments, outside of the physical body that you see.

TVLINE | And what was your reaction at the end of the episode when Morgan Edge revealed himself to be Superman’s “brother”?
Full disclosure: I like comic books a lot, but I never got super deep into them as a kid. Still, when I’m reading these scripts, I can tell when there’s a poignant moment, like with John Henry Irons and Steel. I always go on a Google search afterwards to educate myself. So when I read that and saw “brother,” I was like, “Oh my gosh, that’s going to be a large way to end the show.” So I started going back to see how that could possibly be. We have incredibly talented writers, and their knowledge of the Superman world is amazing.

Were you surprised to learn that Kyle is already hopped up on X-Kryptonite? And what do you make of Morgan Edge’s big reveal? Drop your thoughts in a comment below.