Sometimes the truth hurts, even if you’re a half-human, half-animal hybrid living in a dystopian future.

Heading into the season finale of Netflix’s Sweet Tooth, Gus was crushed when he learned that his mom and dad are not actually his parents at all. In fact, the boy was created in a test tube by scientists, destroying any bit of hope he had left regarding his search for Birdie, the woman he believed was his mother. The big reveal hurt the boy badly, causing him to flee far, far away from his new friends Bear and Tommy. But did the group reunite by season’s end, and did Birdie survive their virus-ridden existence? Read on for a recap.

With Gus on the lam, Tommy and Bear continue to track the deer-child down. Bear mentions that Gus’ birthdate is way earlier than the appearance of the other hybrids, leading them to speculate that Gus just might be the world’s very first of his kind. 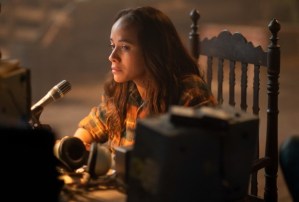 As Aimee’s kids escape through a sewer tunnel, General Abbot and his foot clan move in on the zoo. Abbot knows who Aimee is and calls her a “collector of mongrels.” His goal, of course, is to trap “these little rodents” so the government can experiment on them. (The hybrids just may hold a key to mankind surviving the virus.) Nature doesn’t want us back, Aimee says, before lighting off a ton of fireworks to push back the soldiers. Abbot gives his men the orders to “take it!” but all they can find is a note from Aimee that reads: “Happy extinction!” What a celebration this one-upping of Abbot would’ve been… had Bobby and Wendy not been captured by his goons shortly after.

Having abducted Dr. Singh and his wife, Abbot blackmails the doctor to begin slicing open some innocent hybrids, telling him that a new wave of “the sick” is coming in just a matter of time. “I don’t just want any cure, I want the only cure. And I want all of it,” he says — so that he can control who lives and who doesn’t. When the cure is his, he’ll release Rani. Or so he says.

In a flashback, we finally learn Tommy’s backstory: He and his wife had a baby, but due to the pandemic and increased military presence, he wasn’t allowed to enter the delivery room. When Tommy met his son for the first time, he realized his offspring was half-goat. He considered fleeing, but after running into Dr. Singh, Tommy mentioned not being sure if he could handle it. The doctor replied: “You’ll be surprised what you’re capable of when it’s for someone you love.”

And that’s not the only backstory we were privy to this episode. Bear tells Judy that when her parents died from the sick, men came and kidnapped her hybrid little sister. Being just six at the time, Bear couldn’t do anything about it. She in turn grew to hate adults, ultimately finding someone who shared a similar experience: Tiger. And that’s how her former army was formed. She then says her real name is Becky, but her parents called her their “little Becky Bear.” Judy says she shouldn’t give up on her sister. Not yet, anyhow. Look how far Gus has gotten, after all. 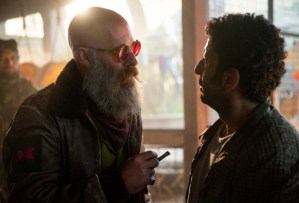 Tommy finds Gus sitting in an open field near a downed plane, but Gus refuses to come back. Tommy returns Dog, telling the boy he should cling to whatever he has from his dad. Tommy then tells the boy about his baby, and how he had no clue how to be a father to a hybrid. “I wasn’t afraid of him. I was afraid of me,” Tommy confides. But when he went back to the maternity ward, his wife and child were already gone. And he never saw them again.

“Don’t make me lose you, too,” he pleads to Gus. Tommy tells the boy they can live together in the woods and teach each other stuff, which sounds like a lovely plan… until a loud boom echoes out and a shot Tommy collapses. Army men drag poor Gus away as he screams for “Big Man” to wake up.

Gus is caged up and delivered to Dr. Singh, who’s begrudgingly preparing to begin his work. When he gives the child a candy bar, Gus says “thanks.” Singh’s face completely drops. He asks Johnny to bring him another patient. Gus is put back into his cage in a room that also contains Wendy, Bobby and so many more hybrids. The children all share a big hug as Gus — who had never met others like him before — smiles brightly.

Meanwhile, someone in a red truck scoops up Tommy’s body, and as the vehicle drives away, Tommy’s eyes open. He wakes up to find it was Aimee who saved him. She tells him to rest up and heal because “tomorrow we get our kids back.”

In one final turn of events, Bear’s satellite phone finally makes a connection to someone located in the snowy Alaskan wilderness. That person is revealed to be Birdie, who is very much alive, well and searching for Gus.

What did you think of Sweet Tooth‘s final hour? Will Gus, Bear and Tommy ever be reunited with their families? Grade the finale and season below, then hit the Comments!