Many authors claim that when they’re writing, they go to a different world hidden deep inside their imagination. For Lisey’s Story‘s Scott Landon, that world may be more real than fantasy.

In Apple TV+’s adaptation of Stephen King’s 2006 novel (two episodes are now available), Lisey Landon (Academy Award winner Julianne Moore) is haunted by memories of her deceased husband Scott (The Knick‘s Clive Owen) and the darkness that plagued his life. As she struggles to grieve his passing, she also contends with a dangerous stalker obsessed with her husband’s work. As multiple timelines collide, the line between what’s real and fiction rapidly begins to blur. Here’s where her Story begins: Read on for a full premiere recap.

When we first meet Lisey, she’s forlorn and floating in a pool, reminiscing about her lost love. One of her memories is a literal nightmare, one where her famous author husband is shot while giving a speech, causing Lisey to jolt out of bed. (Hang tight, kids. We’re gonna be jumping around more than House of Pain.)

In Scott’s den, she finds a message tied to a shovel — the same shovel she used to slice the shooter’s face open. It reads: “Bool. First clue. I said Doctor. Mr. M.D.”

The phone interrupts and it’s her ill sister Amanda (Tony Award winner Joan Allen), who unfortunately has a history of cutting. Lisey takes care of her sister’s wellbeing, but when Amanda smashes a mug, she calls her other sister, Darla (Atypical‘s Jennifer Jason Leigh): “I think she’s doing it again.” 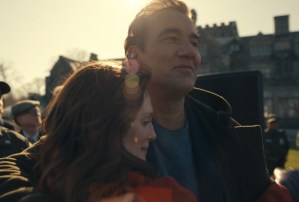 Before she can pull out of her driveway, Professor Dashmiel pulls up. He wants Lisey to release Scott’s unpublished work so it can be reviewed and published. According to Lisey, Dashmiel “ran like a rabbit” when the gun was pulled that day, but he later returned to soak up the credit. The professor tells her she was nothing but a restaurant hostess before she met Scott, so clearly, these two aren’t buds. Lisey tells him he’s never getting access to Scott’s work, and as she drives away, she purposely smashes into his car.

The two sisters arrive to Amanda’s house to find food burning on the stove and the woman’s arms all cut up. Lisey asks her what Scott did for her the last time she got like this. We flash back to a scene where Scott tries to snap Amanda out of a fugue state. He says, “This is just between us,” and kisses her on the lips, only it isn’t sexual: Some strange water gushes from his mouth to hers, and it does indeed wake her up. “It’s from the pool. There’s nothing like it. At least not in this world,” he says. Okaaay.

Back in the present, Dashmiel calls a man named Jim. They talk about a plan they’ve concocted which includes “applying a little bit of pressure.” Whoever Jim is, he sounds like pure evil. “Scott Landon is life. His books changed me,” he says, vowing to get the papers from Lisey.

Amanda tells Lisey that she knows about the “bool hunt” Scott left behind. It’s meant to be like a treasure hunt, and Scott said his wife would eventually figure it out.

That night, Lisey dreams of a dark world deep in the woods where a giant monster lurks beneath a beaming orange moon. Cutting to the day of the shooting, we learn that Scott didn’t die from the bullet, but he was in critical condition. In another dream, the shooter is waiting for Lisey in Amanda’s house. 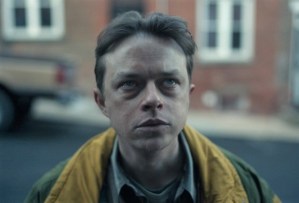 We meet creepy Jim in the flesh at a library Scott opened prior to his death. The psychopath is off his rocker, making crazy demands to a poor librarian, while dropping fanboy factoids about Scott’s early life and career. Jim violently knocks a bunch of books off of a shelf to display one of Scott’s favorite childhood novels, as his disposition takes a frightening turn. He venomously states that the library is there because of Scott and not his wife.

Lisey finds the second clue inside Amanda’s address book, directing her to a doctor at a rehab facility. She calls him, and learns that Scott told the doc all about Amanda’s cutting and semi-catatonia, and arranged for Amanda to stay there, too.

In another flashback, Scott says he has visions… visions he writes down that people pay to read. He hints that he has some difficult memories to share with Lisey about his brother and dad, but we cut away before getting to those goods.

Later in the present, Jim calls Lisey and says she’s going to give “the prof” what he wants, and that she never understood her husband’s greatness. “If that doesn’t happen soon, I’m going to come to where you’re at and hurt you in places you didn’t allow the boys to touch at junior high dances,” he threatens. She tells him to F himself and hangs up.

The episode comes to a close with Lisey sitting on a swing, replaying the shooting in her mind over and over again. While Scott bleeds out he tells her, “Long boy. It makes a sound.” We hear some gnarly growling, and once again see the monster inside its spooky dreamland.

Now it’s your turn! Grade the premiere below, then hit the comments with all of your thoughts and theories.