Imagine if Bambi had been born into a dystopian future full of fear, hate crimes and a deadly virus. Mix those elements in a blender and you’ve got Sweet Tooth, Netflix’s latest fantasy drama.

Adapted from the DC Comics story of the same name by Jeff Lemire, the eight-episode series (now streaming) follows Gus, a lovable boy who’s half-human and half-deer, as he searches for a new beginning following a personal tragedy. With help from a gruff, no-nonsense man who eventually becomes his protector, the boy must quickly adapt to his new role in the newly deconstructed society. His life depends on it.

When the series begins, a mysterious event called “the Great Crumble” is tearing society apart as a deadly virus runs rampant across the globe. After rushing his possibly afflicted wife to the hospital, Dr. Aditya Singh (Ghosted‘s Adeel Akhtar) learns that babies are being born half-animal. As the narrator (Life in Pieces‘ James Brolin) tells us: “No one knew which came first, the hybrids or the virus. But that question would become the biggest mystery of our lifetime.”

Thus begins the story of the “very special boy” named Gus (Pup Academy‘s Christian Convery), who lives in the forest with his father (The Last Man on Earth‘s Will Forte). Dad has built an entire compound deep in the woods where they live fenced off from society with everything they need. As Gus ages, his dad teaches him how to survive in their post-apocalyptic world — a world that wants hybrid beings dead — as they fish, play in the snow and even mine sap from trees.

When a batch of fliers fall from the sky claiming that a safe place for hybrids exists, a haven where they can receive healthcare, food, water, shelter and safety, dad crumbles it up and burns it. 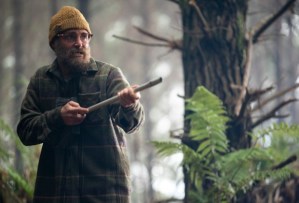 One day, Gus realizes his ears are the same as a deer’s, causing the seven-year-old boy to wonder what’s “out there.” His dad tells him that greedy people started to take over, so Mother Nature made everyone sick. Then a miracle happened, and hybrids were born into existence, only people feared them because they were different. So nature set the rest of the world on fire, and now it burns forever. Gus then tells his dad that he saw his mama (the deer), but dad confirms his mother is gone.

Gus’ ninth birthday rolls around, and with age comes more curiosity. When a tree knocks out part of their fence, he bravely steps beyond their zoned sanctuary. His dad finds him and loses a gasket, but all the boy wants is to find his ma.

A stranger comes to their fence claiming to be looking for his sister. Dad greets him with a rifle. The man says the internet’s down, and society is now just tribes of people fighting for scraps. People think the hybrids caused the collapse. The stranger takes off, leaving pink tags all along their fence. Looks like their sanctuary has just been exposed.

Dad sticks Gus in a cubby to hide him, and takes off to find the intruder. When his dad is gone, Gus hears movement in the house. He throws open the cubby door to find the deer from before standing in the middle of the house. After he hears his dad screaming, he ventures outside with his slingshot, only to find Dad moseying back. “You’re safe now. He won’t hurt you,” he whispers before collapsing.

Gus gets his dad inside, and the next morning Dad tells Gus the truth about his mom. They were separated, then life happened, so Dad brought Gus to their forest home (skimpy on the deets, aye, Pop?). After his father sadly passes away, the boy becomes the man of the house, building figures out of sticks to keep himself company. Gus attempts to do all the house chores with varying degrees of success, but accidentally lights his plants on fire. In a moment of frustration, he also burns his fake pet named Dog. 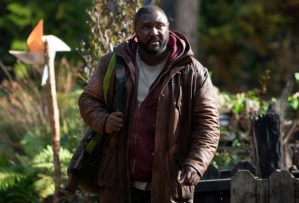 The boy finds a lockbox with money, credit cards, a copy of the flier and a photograph of a woman who is presumably his mother. The photo has “Colorado” written on it,  so Gus pulls out a map. He packs up some supplies on a cart and hits the dusty trail, only he stops when he finds a candy bar. He opens it up and takes a chomp, only to see another one further ahead. When he goes to snatch number two, it’s pulled away on a line, and that’s when the arrows start flying. Gus runs and hides only to get abducted by a man in a camo suit. Just as one of the men is about to shoot him dead, an unknown assailant takes out the soldier. A large man (who we’ll later know as Tommy Jepperd, played by Zoo‘s Nonso Anozie) steps out from behind the brush, and Gus flees for home.

Tommy follows him and is surprised the hybrid can talk. He warns the boy against lighting fires during the daytime; he saw the smoke from miles away. The man duct-tapes a leaky pipe outside, while an untrusting Gus continues to fire his slingshot at him (little brat!). Gus asks Tommy where Colorado is, but Tommy tells him to stay put because people are hunting his kind. Gus’ mind is blown at the thought of others just like him. Tommy nicknames him “Sweet Tooth” (because of his affinity for chocolate) and bids the boy farewell.

Shortly after, Gus follows Tommy’s large footsteps. He climbs up and over the fence, and sprints forth through fields and up hills. He yells down to Tommy, “Big man! Take me!” as Tommy looks up at him.

Is this the beginning of a beautiful friendship? Grade the Sweet Tooth premiere below, then sound off in the Comments!