Batwoman‘s Ryan Wilder is fired up and determined to find the police officer who shot Luke, and TVLine has your first look.

The May 16 episode left us on a huge cliffhanger in which a cop opened fire on Luke, who reached into his jacket for his phone to prove that he wasn’t trying to steal a car, as had be insinuated. (Catch up if you’re behind via the CW app or on CWTV.com.)

In our exclusive sneak peek at this Sunday’s episode (The CW, 9/8c), which you can check out above, Batwoman returns to the Batcave to use their souped-up computer to uncover the shooter’s identity, since the Crows have kept his name under wraps. 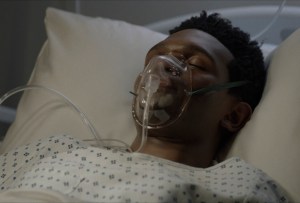 With help from Mary, she’s able to access the internet and figure out exactly who pulled the trigger: a Crow by the name of Russell Taveroff. To make matters worse, this is the same man responsible for the church massacre and who also messed up her investigation of the False Face Society.

“I wanna see how Russell is against someone who is bulletproof,” the titular hero vows to Mary on her way out.

This week’s installment will be a heavy one for the Bat Team: “As Luke Fox’s life hangs in the balance, repercussions from the devastating event are the catalyst for some life-changing decisions for those around him,” the official description reads.

Who else is extremely worried for Luke? What do you hope to see in the remaining episodes? Sound off below!