Friendly warning: We’re about to spoil Thursday’s episode of Younger. Haven’t watched? You know the drill.

Thursday’s penultimate episode of Younger rewarded fans’ patience by finally giving them what they’ve been waiting for all season. So… now what?

Let’s start with Pauline, who unexpectedly blew back into Liza’s life like a pumpkin spice-scented tornado, offering to help sabotage Charles’ relationship with Quinn because “true love is supposed to win.” She even phrased it in editor-speak for Liza’s sake, explaining that Charles and Quinn’s story “needs a rewrite.” But Liza was not amused by this word play, reminding Pauline that you “can’t tell someone else’s story.” Touché!

But did Pauline take that lying down? Hell no. In fact, she kicked things up a notch by stealing Charles’ passport, effectively putting the kibosh on his romantic island getaway with Quinn. Proving that she’s a boundless source of chaos, Pauline also Fed Ex’d the passport to Liza, unknowingly making her complicit in the whole scheme.

After hauling ass to the airport to give Charles his passport, Liza wished him all the happiness in the world, fully believing — thanks to Pauline’s manic meddling — that Charles intended to propose to Quinn on this very trip. So imagine Liza’s surprise when Charles opted to pull a Rachel, getting off the plane to reunite with Liza.

As for Quinn? “I honestly don’t even think I like the woman,” Charles admitted, which felt a little flippant for someone he’s been dating all season. But with only one episode of this show left, we really can’t afford to give anyone time to process even a single emotion. 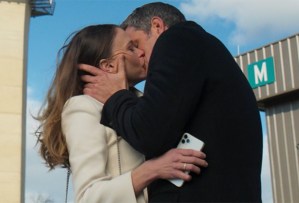 “The only ring that I ever had was the one I bought for you,” he said. “Liza, I have been a fool, and I’m so sorry that it look me so long to realize that. Forget marriage, I just want to be with you any way that you want — any way — if you will still have me.” She didn’t technically give him an answer, but we’re pretty sure their sweeping kiss speaks for itself.

On the business front, Charles formally approved Liza and Kelsey’s Inkubator pitch, offering hefty bonuses for both of its founders. In the interest of getting the best deal, however, Kelsey let Rob send her pitch to one of his venture capitalist buddies, setting off an e-mail chain that led straight to — you guessed it — Quinn. The question is: Will she invest in Inkubator just to spite Charles? Or will she use her influence to sour anyone from investing in the start-up completely? Guess we’ll find out next week!

And then there’s Lauren, whose father got a little too drunk at Kelsey’s housewarming party, challenged Josh to a push-up contest, and ended up being rushed to the hospital after suffering a heart attack. It was a stressful (yet strangely hilarious?) ordeal that took a most unexpected turn when Mr. Heller’s doctor was revealed to be none other than Lauren’s ex-boyfriend Max! Both of Lauren’s parents insisted that she treat Max to a thanks-for-saving-my-dad’s-life dinner, but she insisted that she’s only interested in dating women at the moment. Maybe she should tell that to her subconscious, which cooked up an imaginative (and once again hilarious) sex dream about ol’ Max.

OK, let’s talk: Was Liza and Charles’ airport reunion everything you hoped it would be? What manner of evil scheme do you suspect Quinn of concocting on her sad, lonely flight to Mustique? And should Lauren follow her parents’ (and her subconscious’) advice about Max? Drop a comment with your hopes for next week’s series finale below.