Paramount+ has more insight to share with us about Why Women Kill… but Thursday’s Season 2 premiere is ultimately more concerned with why men kill. One man in particular, really.

The Marc Cherry-created dark comedy returned on Thursday with two episodes — its first new installments since Season 1 wrapped in October 2019. And this time, instead of the ’60s, ’80s and 2010s, the anthology takes place in 1949, where a plain housewife named Alma (Fargo‘s Allison Tolman) is desperate to be accepted into the ritzy and exclusive Elysian Park Garden Club.

When the Garden Club’s elderly founder passes away, Alma hopes to be considered for the now-vacant spot, and she awkwardly chats up some of the club’s snooty members at lunch one afternoon. Seeming to take pity on Alma, the gorgeous and stylish club president Rita Castillo (Once Upon a Time‘s Lana Parrilla) invites her to a party at Rita’s that weekend, which will double as a memorial for the club’s late founder. Alma is delighted at the invitation, but her rude neighbor Mrs. Yost takes the wind out of her sails, explaining that the event will merely be a fundraiser, Alma will likely be charged to even attend it, and, as she so unkindly tells Alma, “They don’t let frumps in the Elysian Park Garden Club.” Oh, hush, Mrs. Yost.

Alma’s husband, Bertram (Into the Badlands‘ Nick Frost) — more on him in a minute — gives Alma some money to buy herself a spectacular dress for the party, but the lovely fuchsia number that catches her eye is a steep $800. Instead, she buys some fabric in that same color and decides to make a similar dress. When she’s rummaging through her attic to find a new sewing needle, Alma curiously finds a brooch underneath a chest of drawers in the corner of the attic; it’s a cameo with a tag on it, which reads, “Enid Dolan, Feb. 14, 1945.” 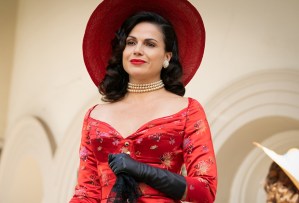 The next day, Alma wears both her pink dress (which Rita insults) and the newly discovered brooch to the garden party, and it’s the latter piece of jewelry that another club member, Grace, notices. Grace explains that her Aunt Enid had one just like it, but Grace found Enid dead on her sofa a few years back, and she assumed her aunt’s nurse swiped the brooch. But after realizing that the inside inscription reads, “To Enid, Love Jack,” Alma returns the brooch to Grace, lying that she bought it at a church rummage sale years ago, but Grace should have her family heirloom back. (And the good deed pays off: Unbeknownst to Alma, Grace finds Alma incredibly sweet, and she wonders aloud to another club member if perhaps Alma would like to join the group.)

Later that night, intrigued by the brooch that suddenly appeared in her attic, Alma returns up there and moves aside the chest of drawers, revealing a panel of the wall that falls open. Inside, there’s a sewing box full of similar trinkets — a comb, a pipe, other odds and ends — all of them labeled with someone’s name and a date. Alma takes all of the objects out of the box and looks at them, a bit confused and concerned.

Meanwhile, there’s her hubby, a beloved veterinarian who takes great care of his furry patients. At the top of the episode, his first patient of the day is an old pup named Biscuit, whom Bertram lovingly puts down while “Clair De Lune” plays; as he explains to Biscuit’s owner, Maisie, he wants to make even the animals’ final moments enjoyable if he can. Maisie, in turn, is clearly taken with Bertram, inviting him to the club where she sings at night and fretting that he claims to be happily married.

That evening, after giving Alma the dough to purchase a nice party dress, Bertram clearly wants to head up to the bedroom with his wife, if you catch my drift. But Alma, too giddy at the prospect of the garden party, isn’t interested — and Bertram instead pays a visit to the club to hear Maisie sing. They share a few drinks, but when he walks Maisie home and she invites him upstairs for a nightcap, Bertram spies a nosy neighbor peeking at the street through her blinds, and Bertram politely rain-checks their drink. 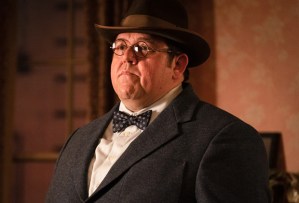 The following day, while Alma is at her garden party, Bertram stops by Maisie’s apartment with a bouquet of flowers. She lets him inside, and he notices some past-due medical bills on her coffee table. When Maisie catches Bertram looking at them, she reveals that her doctor has diagnosed her with cirrhosis, and the doc thinks she’s dying. “I know,” Bertram replies, revealing that he’s noticed some worrying symptoms in Maisie — fatigue, jaundiced skin, bruises on her body from a mysterious “condition” she mentioned. But Bertram believes Maisie should enjoy herself while she still can, and he uncorks a bottle of wine for them to share.

Not long after Maisie has a glass, she starts feeling woozy… and Bertram nonchalantly shares that he put a sedative (!) in her wine. He ushers her over to the couch, and within seconds, she can barely move, save for the tears running down her cheeks as Bertram reveals he plans to euthanize her. His philosophy: If we take such good care of our pets and put them down when they’re suffering, why not do the same for humans? Especially when Maisie mentioned she had no friends or family left? And Maisie is left to watch in horror as Bertram pulls a syringe from his bag, injects it between her fingers, then closes Maisie’s eyes after she passes away. Then, as if he didn’t just literally kill a woman, he oh-so-casually sticks that bouquet of flowers in a vase, wipes down everything he touched in Maisie’s apartment, picks up a small folding fan he finds in her living room, then leaves.

Upon getting home, Bertram checks that Alma’s asleep, then heads upstairs to the attic… where he pulls out that sewing box of trinkets. To the collection, he adds Maisie’s fan, tagging it with her name and the date, then heads into bed with his wife. But, as revealed to us in the final seconds, Alma isn’t asleep: She’s wide awake on her side, and she looks horrified.

OK, your turn! What did you think of Why Women Kill‘s return? And did you see that Bertram twist coming? Cast your vote in our poll below, then hit the comments with your full reviews!