Warning: The following contains spoilers for Thursday’s barn burner of a Station 19 season finale. If you haven’t watched yet, drop this recap like it’s hot. Which, by the way, it is.

Now that was a season finale! In the span of an hour, Station 19 axed one first responder and promoted another, reunited two couples, split up a third and married off Maya and Carina. While the smoke clears, let’s review the events that have left at least this recapper all fired up.

‘I AM NOT DOING THE CHICKEN DANCE IN A MASK’ | As “Forever and Ever, Amen” began, tensions were running towering-inferno-high between Andy and Sullivan on Maya and Carina’s wedding day. But why? In Robert’s estimation, he’d just saved his wife’s job. In hers, however, he’d done something unforgivable. What, though? To find out, we’d have to flash back by two days (and wait until the end of the hour). In the meantime, the soon-to-be-weds took a break from basking in their love only long enough for Maya to restate to her bride that she didn’t want the hassle of having her parents at their nuptials. Meanwhile, at an already-restored Kaminski’s, Vic learned while decorating for the ceremony with her parents that Theo had inquired about her when he’d come by for pierogis. Cue the strings of her heart being plucked in 3, 2… 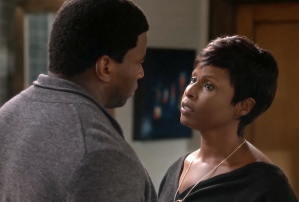 On Dean’s houseboat, the firefighter balked at Condola’s suggestion that he accept the settlement offer being made by the PD. While it was as easy as pie for “the trust fund baby with a houseboat” to turn down all that money, it was an altogether different matter for Jada’s mom, Joyce. “She doesn’t have the luxury,” Condola noted, “of holding out for something as intangible as change.” With that, she kissed him — and got a reaction that made plain the fact that he just wasn’t that into her. It wasn’t that she had been imagining chemistry between them, he assured her, it’s just that “I’m in love with someone else.” Immediately, Condola guessed whom and encouraged Dean to tell Vic. “I would want to know if I were her,” she added. Elsewhere, Travis was hanging with his father when… WTH? “I’m in love,” Dad blurted out — with his (cough) friend. Did Travis feel that way about someone? He really should, said Pop, who was so giddy, he fancied himself a relationship expert even as he was headed home to his clueless wife. 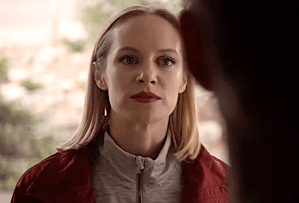 ‘WHAT IF WE BOTH WEAR PINK?’ | After Bailey discovered that Ben was going for a third and maybe fourth opinion to reassure himself that he didn’t need chemo, he arrived at Kaminski’s and became yet another person who knew that Dean loved Vic. (Soon, Hughes was going to be the only one still in the dark about it!) For Pete’s sake, tell her, Ben and Jack urged Miller. What if he died on a call? Or, worse, what if she met someone? (Or got together with someone she’d already met… ) When Travis arrived, he was still reeling from the fact that his dad was head over heels, and he himself couldn’t even work up the nerve to ask Emmett to be his wedding date. (Of note: He did work up the nerve by and by.) For his part, Jack was distracted by what had transpired earlier in the day. Inara, it seemed, was moving to California with Marcus. Marsha insisted that he “marry the girl! Make her your own! Move to California if you have to!” But he seemed to have made himself comfortable — or would that be uncomfortable — on the fence. 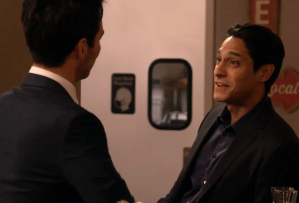 As Andy helped Maya get ready to make Carina her missus, Herrera wondered aloud if maybe, just maybe, she was focusing so much on her outfit (and her difficulties settling on one), because she didn’t want to think about her parents’ absence. Finally, Maya decided to bite the bullet. She had Andy take a detour on the way to Kaminski’s, knocked on her folks’ door and announced to her bully of a father, “I’m bisexual. A queer, I guess they say now. And I am in love with a woman, and I am marrying her tonight.” As for her mom, “you don’t deserve to be cowering behind him in the hall again,” Maya said as the poor woman did just that. So if at any point Mrs. Bishop wanted to leave, she was more than welcome to move in with Maya and Carina. With that, Bishop dropped the mic. Back at Kaminski’s, Travis was surprised by Theo’s arrival. Vic’s folks had invited him, he explained. Later, he shared how gutted he’d been to learn that Vic and Travis were BFFs. In another place and time, they could have all been as close as Travis, Michael and Theo. 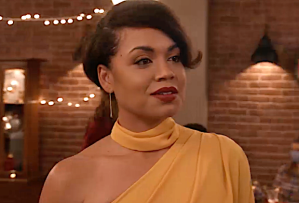 ‘I NOW PRONOUNCE YOU WIFE AND WIFE’ | As the wedding ceremony got underway, with Vic crooning “Love Me Tender” and Ben walking the brides down the “aisle,” Maya’s mom showed up. Shortly, Maya realized that she hadn’t written any vows. Carina loved it, though. “Queen of the clipboard Maya Bishop was so excited about something that she forgot!” Following the ceremony, Andy dodged Sullivan as much as she could. (Her shoulder must have gotten frostbite, it was cold for so long!) Outside, she admitted to Jack that maybe she didn’t know her husband as well as she thought she did. Then “is this a bad time to ask for relationship advice?” cracked Jack. He didn’t know whether he should propose to Inara or let her go. “The fact that you’re asking me isn’t a clue for you?” Herrera replied. Lightbulb moment. Later, Inara made the breakup easy for him. “You don’t love me, Jack,” she realized. “You love our family.” But it couldn’t last, and she had to stop breaking Marcus’ heart by acting like it could. So she was going to move, he wasn’t, and she’d always be grateful to him for saving her. “I hope someday you can save yourself.” (Fantastically mature writing there.) 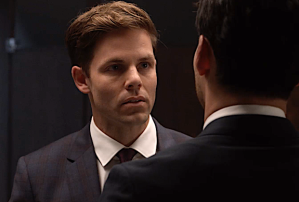 Elsewhere at the reception, while Ben and Bailey encouraged Dean to share his feelings with Vic, Hughes encouraged Travis to do the same with Emmett. Finally, Miller decided to do it — and accept the settlement, if only for Joyce’s sake. As for Montgomery, he told Vic, “I love you. You’re my person, and you always will be.” That being the case, her being with Theo was no longer a deal-breaker. So by the time Dean found Vic outside — gah! The timing! She was already reunited with Theo and happily making out! As for Travis, he apologized to Emmett for not having the guts to return his love. But he wanted to be more than friends now. Unfortunately, Emmett didn’t want to risk having to get over Travis again; he wanted to remain friends. Psych! He might have wanted to, but he couldn’t resist. As Travis walked away, Emmett grabbed him and pulled him into a kiss. (This episode was such a roller coaster — damn!) Finally, when we got through all the flashbacks to two days ago, we learned that Maya had disobeyed Incident Commander McAllister to rush a badly burned child from a house fire rather than risk his life by waiting for an aid car. Livid, McAllister was ready to fire all involved and shut down 19. Instead, Sullivan had talked him into replacing the station’s “cocky” captain with him. He could get the house in order, Sullivan insisted, and at the same time, spare the department a lot of bad press.

So, as the episode and the season ended, while Maya was sharing a romantic dance with her bride, all of her colleagues were receiving a text that revealed that Bishop had been relieved of her duties. “This is you,” Andy hissed at her husband. “You did this.” And that, he had. He saw it as saving her workplace family, she saw it as the ultimate betrayal. How did you see it? And what did you think of that “Wow!” of a finale? Grade it in the poll below, then hit the comments.