Warning: The following contains spoilers for Thursday’s Season 17 finale of Grey’s Anatomy. If you’d rather watch before finding out whether you’ll be crying happy tears or sad — or both — scrub out now.

Credit where it’s due: Grey’s Anatomy delivered in a big way with its Season 17 finale, dishing out an hour that was at turns uplifting and heartbreaking and funny as hell. And though it took us back to the shore, it wasn’t, you know, that beach. Read on, and we’ll zip through the calendar pages (and scenes) that took us in an hour from August 2020 to April 2021. 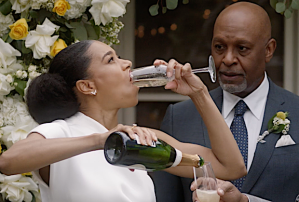 AUGUST 2020 | After an April 2021 intro in which we saw Meredith dropping flower petals on the beach, we flashed back by eight months to find Jo not only sick and tired of living with Levi and Taryn — “We’ll shut up, please don’t evict us!” — but remembering that, thanks to Alex, “technically I’m rich.” So she was going to sell her shares in Grey Sloan, hire a badass attorney, win custody of Luna and move into a place where she doesn’t have to listen to residents’ blather. At the hospital, as Mer began her first day as residency director, she reconnected with Cormac, who cracked that she could’ve just said no when he’d asked her out. “You didn’t have to pass out and spend two months in the hospital just to avoid turning me down.” Cute with a nice side of sparks flying. Nearby, an assisted-living nurse named Gerlie was admitted with COVID. (She’d get more important as the episode went on.) And later at Mer’s, Winston’s grandmother and Maggie’s father brought their wedding to a halt. They wanted a big to-do, with more than 10 people in attendance. So the would-be-weds agreed to postpone. (Maggie’s priceless reaction above.) 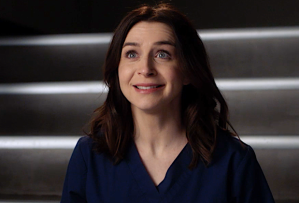 SEPTEMBER 2020 | A month later, Gerlie was being discharged. She had even made it as far as the curb, where she’d had a lovely, honest conversation with fellow COVID survivor Mer, before collapsing and being readmitted. At a virtual meeting, Amelia admitted that even when she was happy, it didn’t last long; her thoughts were just too dark. Link wasn’t like that, she noted. “Sometimes there’s a part of me that wishes he got it. I feel lonely in it.” At Grey Sloan, upon learning that a family was interested in fostering to adopt Luna, Jo floated a wild idea to Link: What if he fostered Luna, just on paper, you know, to get her off the market? Though concerned about Amelia’s reaction, he agreed — so long as he could change the baby’s name to Hildegard. And how did Amelia react? Erm, not great. What happened, she wondered, if Jo didn’t come through and adopt Luna? “Then I guess we’ll have a daughter,” cracked Link. “Bad joke.” In the end, Amelia said that she was fine in a way that indicated pretty clearly that she wasn’t. And before we skedaddled to October, Teddy tested positive for COVID.

OCTOBER 2020 | Two months into her new role as residency director, Mer was ruffling Bailey’s feathers by cancelling grand rounds. Gerlie’s post-COVID complications would be much more instructional, Grey argued. “But it’s tradition,” Miranda said. “Don’t forget,” Mer reminded her, “you gave me this job to change things.” If the residents wanted to be schooled in surgery, they could watch her perform Gerlie’s bronch. Wait, she was hitting the O.R.? It’s just a bronch, Mer scoffed. But she became so dizzy during the procedure that she needed a wheelchair. In other developments, as Jo discovered that selling shares in a hospital during a pandemic wasn’t as easy as she might have hoped, she tried in vain to pawn them off on Link, who reported that he’d already been approved to foster Luna. Meanwhile, Amelia was at a meeting, sharing that she didn’t want what her babydaddy did, and Teddy and Owen were engaging in some end-of-her-two-week-quarantine nookie. (Good thing she said she’d gotten her energy back.) 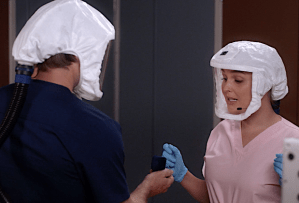 DECEMBER 2020 | As Christmas Eve rolled around, Cormac presented Mer with a bottle of whiskey. “It’s open and half empty,” she noted. “Short notice,” he replied. At last they had a drink together, albeit one in the doctors lounge. Elsewhere in the hospital, Link revealed to Jo that he’d gotten a ring with which to propose to Amelia. Actually, make that four rings. “You are literally holding the value of three of my loft in your hands,” Jo marveled. But when he intended to do it at a get-together at Mer’s, the moment was stolen by Owen, who arranged for it to snow for Teddy, got down on one knee and re-proposed to her. (She said yes, as if there was any doubt.) 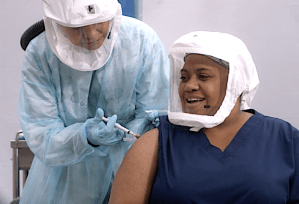 JANUARY 2021 | As the staff of Grey Sloan began getting their vaccinations, Bailey was riding high. “I love needles,” she cheered. But she and Mer soon took away one another’s joy when Miranda shot down her idea of a double lung transplant for Gerlie. And Bailey’s day would soon get worse. Though Jo reported that her attorney was amazing and she would be getting custody of Luna after all, she was also expensive… so she’d sold her shares of the hospital… to Bailey’s worst nightmare: Tom. As he fought for change, he’d decided “I wanted some skin in the game,” he said over FaceTime. Following a meeting during which Amelia hadn’t shared, Richard reassured her that it was OK if it didn’t work with Link. “You’re allowed to want what you want, even if it’s not what he wants,” Webber reminded her. What’s more, if she gave herself permission for it not to work, it “might give you the peace of mind to stay.”

Later, Mer enlisted the residents’ help in pitching Bailey on the idea of a double lung transplant for Gerlie. Argh, cried Miranda (more or less). Grey was supposed to teach them. “This is me teaching them!” she said — teaching them to advocate for post-COVID patients. Bailey saw it as Grey “breeding an army of little you’s,” but Mer had a point with which her friend couldn’t argue: “If this was me or your mother, you would be screaming from the rooftops” to get the double lung transplant. At last, Bailey relented. Gerlie could go on the donor list. But “you’re starting back grand rounds,” Bailey added, “or you’re fired.” 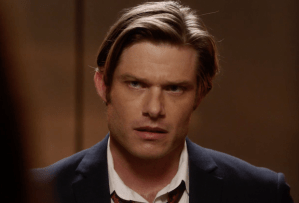 APRIL 2021 | In our last time period, we discovered that Mer had been dropping petals because Maggie and Winston were having their “I do”-over on the beach. Following a beautiful ceremony — and wow, did Kelly McCreary define the word “radiant” — Mer got a text: She and Teddy had to leave, because donor lungs had come in for Gerlie. So as the joyful reception went on, Grey and Altman saved Gerlie. Meanwhile, Jo was FaceTiming with Jackson… whose place she had moved into with Luna! “Welcome home, Jo,” he said. Back on the beach, Zola reassured Link, “You’ve got this,” before they and Mer’s other kids revealed to Amelia that they all had engagement rings for her. Would she marry him? Oh dear. No. No, she would not. (Link’s face when he later showed up on Jo’s doorstep kinda says it all, eh?) As the episode drew to a close, Bailey had arranged for a clap-out to greet Mer when she left the O.R. And while waiting for Gerlie to wake up — she did, by the way — Grey texted Cristina, who was about to perform the same procedure on a patient of her own. “Don’t forget who did it first,” joked Mer.

So, what did you think? Pretty great episode, no? Grade it as well as the season in the polls below, then hit the comments with your hopes for Season 18.