Characters die on Snowfall every season. But there was something about Manboy’s death in Season 4 of the FX crime drama that still brings a reverential smile to the faces of Damson Idris, who stars as Franklin, as well as the cast and crew.

For starters, in order to shoot the scene from Episode 9, titled “Sleeping Dogs,” Melvin Gregg had to fly back from Australia, where he had begun shooting the Hulu limited series Nine Perfect Strangers opposite Nicole Kidman and Regina Hall. His character Manboy also suffered a three-minute death scene that began with Tanosse (played by Adrianna Mitchell) stabbing him and ended with Franklin shooting him multiple times before firing an eternally silencing shot to his throat.

“It’s a testament to his performance and how great it was,” Idris tells TVLine during a recent FYC panel. (Snowfall, along with cast members Idris, Amin Joseph and Michael Hyatt, are all TVLine Dream Emmy nominees.) “He had to break, go to Australia, do a completely different project and come back and die for us. And he came back and died brilliantly. It was just a fun day. So much happened in the process of filming it, so much magic and genius. He’s going to be truly missed.”

Justin Hillian penned the episode and Carl Seaton directed, giving Manboy the necessary and dramatic death he deserved and sparking Twitter users to ask how he still talked trash with all of those bullet holes. 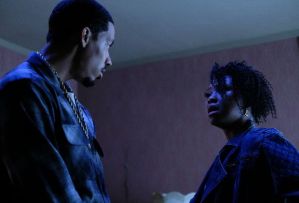 “My favorite part was dying,” Gregg notes. “I did a short a couple of years ago where I put, like, five different Denzel [Washington] characters all in one narrative. When I played Training Day Denzel, I would get shot and still be talking. And then I pulled out a cigarette and kept talking, because Denzel takes forever to die.”

“When I read the [Snowfall] script, that’s the first thing I thought about,” Gregg adds, chuckling about the similarities. “I was giving my best, slowly dying Denzel. It was cool. I imagined it would be very serious and tense, but we were cracking jokes between takes.”

Gregg says he also enjoyed the technical aspects. “It’s like a dance,” he says. “Adrianna stabbed me with one fake knife, and then we cut, and they gave her another fake knife with blood on it. And all the bullet wounds and blood were added digitally in post. It was like playing cops and robbers as kids.”

Snowfall executive producer Dave Andron says he’s happy Gregg is going on to other projects, but adds that he will miss the edge the actor brought to his performance in Seasons 3 and 4.

“We needed somebody who could walk into that room with Franklin, Louie, Jerome and Leon and feel like an actual threat,” Andron says. “We were truly blessed with Melvin. Being as loquacious as he was, it was only right that we send Manboy out with a proper monologue.”