When Julianne Moore first decided to sign on for Lisey’s Story, Apple TV+’s upcoming limited series from the mind of author Stephen King, she went straight to the source himself.

“He was so wonderful and welcoming and excited…,” the Academy Award winner tells TVLine. “He had been very ill and close to death but recovered, and when he came home, he found out that his wife had cleaned out his office, so it made him feel like he didn’t even exist in that world anymore. So that was his inspiration for the story: ‘What would happen if I suddenly disappeared from my own life?'”

Enter Moore’s widow character, Lisey, who suffers a massive setback after losing her famous novelist husband Scott Landon (The Knick‘s Clive Owen). When we first meet her (the series premieres its first two episodes Friday, June 4, with new installments dropping weekly), she’s still very much in grief. Those feelings are exacerbated by the failing mental health of her sister Amanda (The Family‘s Joan Allen), the emergence of a frightening and violent stalker of Scott’s, and a posthumous treasure hunt left behind by her husband.

Moore spoke with King (who wrote the screenplays for all eight episodes himself, adapted from his 2006 novel) about “the secret world that couples share,” and what it actually means to build a life with someone else.

“When you’re in a partnership, the only other person who knows what you share is your partner. So you build a universe of two, and you carry that no matter what happens,” Moore explains. “That core understanding travels through your relationship.”

That can very much be said about the marriage between Lisey and Scott. The series travels back and forth through time, with copious flashbacks and dream sequences helping detail the couple’s past darkness that continues to haunt Lisey’s present. Lisey’s Story in turn puts its title character through emotional and psychological warfare. Love, fear, trauma, grief and more permeate throughout multiple timelines, plus a fantasy world created by Scott in his youth called Boo’ya Moon. What’s real and what’s pretend begins to blur as Lisey’s memory collides with reality.

With all of the emotional whiplash involved, you have to wonder if it was particularly draining to be constantly immersed in such heavy feelings and strife. 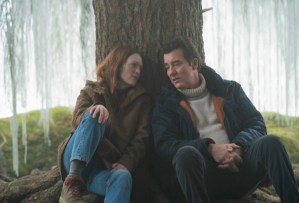 “No, I think it was exciting,” counters Moore. “I love the layers of experience. I like the fact that we had four different timelines. It was really challenging to keep track of it sometimes — and also where she was emotionally in the story — because obviously where she is at certain points in the present day, where she’s suffering so much loss , is vastly different from where she was [in the past] when she was in the happiest part of her marriage.

“It’s very much what life is like,” she continues. “That idea that your experience is not just of the present day, but it’s accumulated, so you could always go deep into memory to remember what happened to you or how you experienced something, and that informs what you’re experiencing in the present. Psychologically, it was interesting to play.”

For these reasons and more, Moore was drawn to Lisey, appreciating King’s realistic and human approach to storytelling.

“When he arrived on the [storytelling] scene, it almost felt revolutionary,” she says. “Here was this novelist who was talking about what our normal everyday existence was like, and he takes all that stuff and adds this element of psychological horror that really relates to our emotional states. It’s just so beautiful.”

That psychological horror is taken to extremes in Lisey’s Story, as the threat from madman Jim Dooley (In Treatment‘s Dane DeHaan) turns brutally violent, while Amanda’s self-harming tendencies come to a head. Add all of this to her husband’s messages from beyond the grave, and it’s safe to say that Lisey is going through it. Despite everything, she must use her own inner strength and loving memories to pull herself out of what seems, at first, to be torturous, never-ending grief.