The following contains spoilers from all of Lucifer Season 5.

Lucifer Season 5 introduced us to the titular devil’s twin, saw God pay an unannounced visit to Earth, and even took us to Heaven. But one of its boldest narratives involved Mazikeen’s realization that she desired a soul of her own, and the steps she took to obtain one.

Adding to the complexity of the demon’s journey was the unexpected resurfacing of a love that she had written off as unrequited… but now isn’t.

TVLine invited Lesley-Ann Brandt to revisit Season 5B’s three big moments for Maze, and how her childlike ways nearly prevented her from living her best life (on Earth). 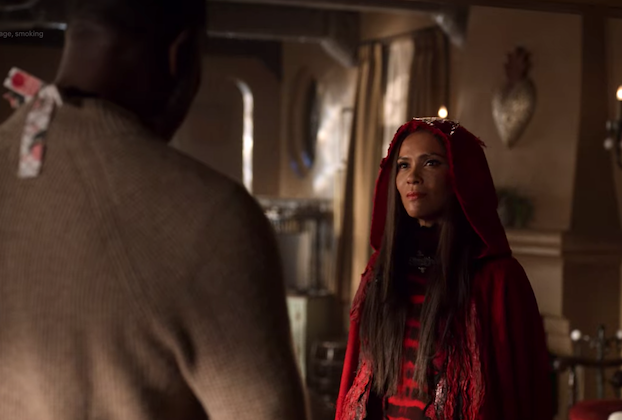 TVLINE | It seems like everybody else got to chop it up with “funny God” (played by Dennis Haysbert), but you had perhaps the most intense scene with him, with that whole, “Mazikeen… you are you” exchange. What was going through Maze’s mind as she heard God’s point of view on her getting a soul?
She is frustrated. She is very childlike in the sense where she thinks, “If I just do this, then this will happen.” She can be very black-and-white about things, so she really feels like, “I’m not all that bad, I’m a good friend, I care about people, I’m not who I was five seasons before, so I really feel like I deserve this. And this will help heal a wound that I didn’t realize was so raw and so open” — that wound being her mother and that relationship, and seeing the way her mother left Earth. Lilith didn’t really get to realize what life could be, so, Maze looks at that situation and is like, “I do not want that for myself, so I’m going to do everything I possibly can — and here is the one being who can help me.”

TVLINE | “Reach into your bag of souls and hand me one, Size 2!”
Exactly! Don’t be selfish! It was incredibly emotional when we shot it, and obviously Dennis is so wonderful to work with. I was really happy I got to do something meaty with him, in that sense. That was one of my favorite, favorite things in the entire series, for sure. 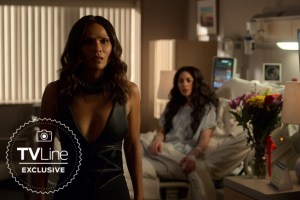 TVLINE | After being denied, Maze was reeling for a couple of episodes when out of nowhere she bumps into Eve (played by Inbar Lavi). Talk about the mixed emotions she had during that encounter.
Talk about picking at a scab. That’s  a wound that hasn’t fully healed ether, and it is kind of connected to the rejection she felt from her mother. Again, in Maze’s childlike way, she saw Eve as rejecting her as opposed to to needing time figure out herself, so she goes into Maze Mode, which is pushing down everything she’s feeling and then trying to find the thing that will fix it, which in her case is a soul. But I think what’s so amazing about this character — and maybe this is why people relate to her  — is she struggles. She doesn’t always get it right. She makes bad decisions, but it’s never from a place of malice. Even when she’s going against Lucifer, or she is rejecting Eve’s initial advances, it’s from a place of hurt.

TVLINE | I love the moment where Eve is like, “I love you, let’s go for it,” but the realization that Eve can be injured and even die screws with Maze’s mind.
Totally. Again, it’s the fear of losing that thing. But what I think the character eventually realizes is you create your happiness; that can’t be someone else’s responsibility. And if you really are going to be a team, you have to be able to talk about things and work through it, as uncomfortable as that feels. That’s the great thing about that relationship; much like Chloe and Lucifer, they go through the ebbs and flows of trying to figure all that out. 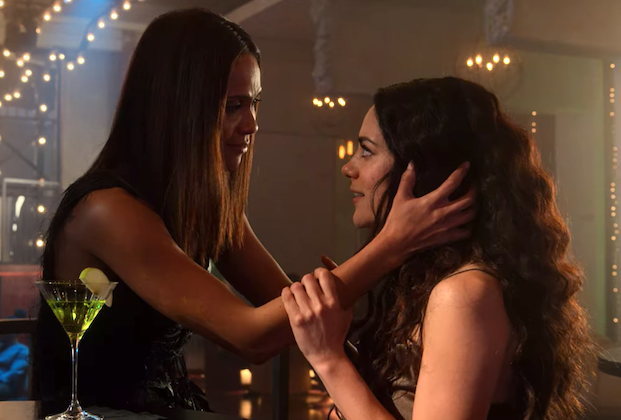 TVLINE | And at the end of the season, Maze meets up with Eve to romantically profess, “I don’t care if you die.”
Ultimately, she is moved by the thought of not having her, and acting against her own stubbornness. “Am I really going to let my stubbornness or my fear live in the ‘What if’?” I think what Maze learns to do is to live in the reach. To always strive to do better. And be better. Even sitting, uncomfortably so, in whatever she is feeling. Love, sadness, pain… all of it. Because as hard and as challenging as life on Earth and human relationships is, it is equally as rewarding and fulfilling — and you only need look at this incredibly family that we’ve created, and these relationships that we’ve nourished, to see that.

TVLINE | In a way, it was selfish of Maze to deny their relationship just because she was afraid of loss, of winding up hurt.
Exactly. Exactly. And there are a lot of people I know, friends I have, who do that, and I’m like, “Life happens every day!” I read this great article years ago about how we don’t always get to be with the big loves of our life, but should we deny they even existed? Shouldn’t we be grateful we met them? Because most people don’t. It’s a blessing [to find that love]. Whether Maze and Eve work out, just to be able to have felt that and lived that, I think, is the blessing.

Want scoop on Lucifer Season 6? I’ve got lots! Email InsideLine@tvline.com and your question may be answered via Matt’s Inside Line.