There’s no shortage of Stephen King adaptations on television, but perhaps none of them are more personal to the writer than Apple TV+’s upcoming limited series Lisey’s Story.

Premiering Friday, June 4 with the first two of eight episodes (followed by new installments every Friday), the show stars Academy Award winner Julianne Moore as the titular widow and Clive Owen (The Knick) as her recently deceased author husband, Scott Landon. When a series of unfortunate events forces Lisey to revisit traumatic memories from her past, she struggles to move on from her husband’s lingering darkness as a dangerous stalker (In Treatment‘s Dane DeHaan) who’s still obsessed with Scott’s work lurks about.

Lisey was originally conceived after King nearly died following a case of double pneumonia, when the scribe returned home to find his wife had cleaned out his study with plans of redecorating. An eerie feeling of emptiness led King to believe that maybe he had died, and later, the experience sparked ideas of what life would’ve been like for his spouse if he was no longer around.

When the idea of adapting his 2006 novel came around, King approached J.J. Abrams and Bad Robot Productions (which had produced other King tales like Hulu’s 11.22.63 and Castle Rock) to help get the project off the ground.

“I was thrilled about the idea, partly because the story was so unique and potent, and partly because it meant so much to Stephen,” executive producer Abrams tells TVLine. “I was really flattered that he would ask. He explained that he wanted to write every episode himself, which was an incredible relief and opportunity because I knew that no one would be better to do that, of course, than the man who wrote the book himself.”

While King has often served as a producer on past series based on his work, Abrams calls the author’s involvement in Lisey’s Story “very rare.”

“To write every episode of this piece was really an indication of how much he cared,” explains Abrams. “He was writing the actual blueprints for every day on set. He and [director] Pablo [Larraín] had great collaboration, but this was a Stephen King authored piece, so that was terrific.” 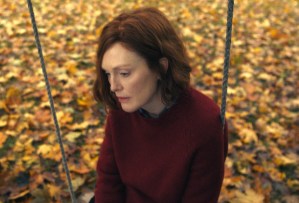 With Lisey’s’ themes of family strife, creative impulse and manic fandom considered, transferring the very much internal story to the screen — including the maybe-fantasy-maybe-real world of Boo’ya Moon created by Scott and his brother as youngsters — was an undertaking Larraín and cinematographer Darius Khondji tackled head-on. The task included answering some big questions, and figuring out how to take Lisey’s experiences of loss and trauma, most of which occur inside deep within her repressed memories, and dramatize them for the screen. Laser-focusing on the story’s most human elements helped them wade through the story’s non-linear narrative and complicated emotions.

“The thing that interested me the most was that it was such a grounded, human, reality-based story, co-existing with this incredible fantasy world,” says Abrams. “[King’s] done versions of this in his writing, but the idea of how those things would co-exist on the screen… because in a book, everyone will interpret what they read their own way, but this had to be brought to the screen in a photo-realistic way.

“Watching Stephen and Pablo work together, and find a way to work out some of the things that weren’t as easily translatable and figure out how to execute that and dramatize it, that was part of the challenge. It was extraordinary to witness.”

Making sure all of the elements gelled together — from the story’s multi-layered dream sequences to its penchant for time-hopping — meant finding an actress with the right skills to step into the role of Lisey. It required a lead who could carry the story’s heavy and sometimes dreadful emotions throughout its multiple timelines and different realities. Abrams says Moore was the first name producers discussed.

“It needed someone who could do it in a way where it was a vicarious experience for the audience and not somehow off-putting and distancing,” he says. “[We needed] someone who could make it look effortless to play someone who is as distraught and struggling and adrift, and then terrorized, and have her still be someone you’re rooting for and connected to, who could ultimately tell a story of hope. It was a huge challenge.”

And that challenge, viewers will soon see, was successfully completed. In just the first few episodes, we’re granted inside access to Lisey’s innermost thoughts and private family life, riding shotgun through the character’s pain and grief as she revisits her husband’s mysterious death, her sister’s worsening mental illness and the horrors brought to her doorstep by DeHaan’s psychopath fanboy, Jim Dooley.

“Despite how terrifying it is, how disturbing it is and how weird it can get, it is a story of perseverance and hope,” says Abrams. “It’s this very strange cocktail that Mr. King mixed for us, and Pablo has done a particularly brilliant job bringing it to the screen.”