Midway through Lucifer Season 5B, Dr. Linda (played by Rachael Harris) made one mother of a sacrifice in the name of protecting Adriana Nassar (returning guest star Alexandra Grossi), the daughter she placed for adoption back when she was a teen.

Worrying that Adriana was involved in a murder stemming from a real estate/burglary ring, and feeling responsible for her biological daughter being “broken” in the first place, Linda confessed to the killing herself. Ultimately, both Linda and Adriana herself were found not guilty, and along the way briefly bumped into each other at the cop shop. But later that night, Adriana showed up at Linda’s house to acknowledge her apparent help with the case… and to note a generous, anonymous donation to the clinic where her sick mother is being treated. A moment later, the jig was up — “You’re my mother. Aren’t you?” surmised Adriana — and mom and child shared a sweet reunion, after which Adriana met her wee brother Charlie.

TVLine spoke with Harris about the emotional hour and its many highlights — as well as invited the OG cast member to give a hint about next season’s series finale.

TVLINE | Episode 13 was a big one for you. What did you think when you first went through that script?
I was really excited, because it was so nice to have that arc within one episode. And I loved how conflicted Linda was with trying to help her daughter. It was both strange and wonderful to get to do that, because my children were so little at that point and I couldn’t imagine not knowing them and how awful that would be. If I had to put myself in a situation like what if for some reason I couldn’t take care of them, and then I later do meet them. The thought alone was gut-wrenching, and so I was really grateful that they gave me that storyline. Richard Speight, who directed the episode, kept saying while he was editing it, “Oh my gosh, I can’t wait for you to see this episode,” which was really nice to hear.

TVLINE | What did you think of the lengths Linda went, to protect the daughter she barely knew?
I understood and empathized with Linda, as a mother, on how you could need to see your child. How you could feel that desperately gnawing at you. The guilt Linda felt and the daily acknowledgment that she left a child behind haunted her, and being as empathetic as she is made her constantly think of what Adriana must be thinking, feeling. Having come from that place, I felt it was completely believable that she would go to those lengths to protect her daughter’s life. Seeing her in trouble and fearing it was because of the brutal decision she made as a 17-year-old was too much for her to push aside.

TVLINE | Were you glad that Linda and Adriana truly “met”? And what did you think of how that final scene at the house played out?
I was in a puddle of tears watching that final scene. I think it hit every note of hope and regret meeting to open up to a new beginning.

Richard Speight was so involved in every aspect of that episode, which felt very personal for me. I struggled to have children and having them now I would do anything to protect them. [Harris has two sons via surrogacy, who turn 5 and 3 this summer.] Linda getting to finally meet her daughter and getting to make amends by showing up for her anonymously, and donating to her adopted mother’s medical expenses anonymously, was an act that showed Adriana that she was going to see she was taken care of even if they never met, which was just beautiful. And having Charlie there… the three of them coming together… 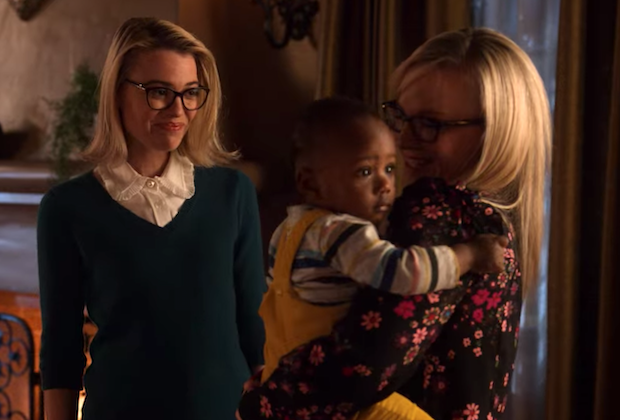 I truly think it was one of the best episodes of Lucifer we have witnessed. Amenadiel and Ella’s faith scene… Lucifer realizing his love for Chloe… Maze and Eve falling back in love, and then fear creeps back in for Maze. It was a solid episode about how faith and fear dictate the course of our relationships. And I’m glad faith, courage and hope brought Adrianna and Linda together.

TVLINE | There is a nice resemblance between you and Alexandra Grossi.
Oh my gosh, I loved it. Alexandra was so sweet and so wonderful to work with…. We’ve stayed in touch, and she always like refers to me as her “TV Mom,” and I do have a maternal feeling with her because she’s obviously younger than I am. She has a pet iguana that I called my “grand iguana,” like my grandson. [Laughs] It was really weird when I saw Alexandra with her glasses on, like, “Oh, my gosh, you look like my mother.” 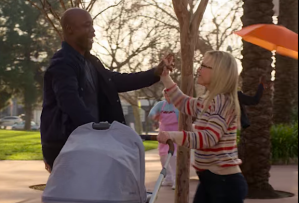 TVLINE | Turning now to earlier this season…. So they say, “Musical episode!” What goes through Rachael Harris’ head?
Oh, well I’m a theater geek — I have a Bachelor in Fine Arts in musical theater — so I was so excited. I couldn’t wait to see what I get to do.

TVLINE | And then they give you and DB [Woodside] a sweet little duet — with some baby stroller choreography!
Getting to do that duet with DB was the most fun ever. Watching him rap and sing, and the dancing with the baby carriages, and working with [director] Sherwin [Shilati]…. It felt like we were shooting a music video. Literally, each song is a little music video for Sherwin. It was very sweet, and we got to spend the whole day together outside, singing.

TVLINE | Lastly, what sort of emotions will we be feeling next season, when the very final scene of Lucifer hits our screens?
I think you’re going to be feeling happy and sad at the same. Sad that it’s over, but ultimately very satisfied. I hope that everyone’s eyes well up with tears, because I know that I was crying!