Dramatizations of the 1921 Tulsa Massacre on TV shows such as Watchmen and Lovecraft Country helped edify audiences about the real-life death and destruction in one of the most horrific and racially violent incidents in American history.

Due to time and narrative constraints, however, these lauded series weren’t able to explain the simmering tension between the affluent Black residents of Greenwood, aka Black Wall Street, and their racist and less wealthy white neighbors in Tulsa. These shows also couldn’t explain how an innocent misunderstanding in a department store elevator between a Black teenage boy and a white teenage girl would be used as a feeble excuse for deputized and bigoted white men to murder hundreds of faultless Black citizens while also attacking, robbing, disenfranchising and criminalizing those who survived.

For those who want to learn more, Monday and Tuesday’s 100th anniversary of the Tulsa Massacre has inspired the creation of a number of TV documentaries and specials for viewers to mentally masticate. This includes Tulsa Burning: The 1921 Race Massacre, which premieres Sunday at 8/7c on History.

Executive-produced by NBA star Russell Westbrook and directed by Emmy-winning filmmaker Stanley Nelson (Miles Davis: Birth of the Cool) and Marco Williams (Two Towns of Jasper), Tulsa Burning deftly unpacks how Black Tulsans acquired land and wealth before Oklahoma was a state as well as chronicling the “Red Summer,” the Tulsa Massacre and the aftermath leading up to the present.

“In light of the past year and George Floyd’s murder, it is an important story to tell,” Nelson tells TVLine of his film. “But it was a real challenge as a filmmaker to tell one story in 1921 and another in 2021 and tell both stories, which have a lot of suspense and tension.” 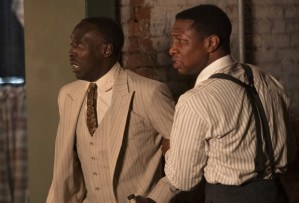 Nelson says he was a fan of both Lovecraft Country and Watchmen, but proudly adds that Tulsa Burning goes a lot deeper and includes real-life survivors and descendants.

“I watched both shows, and I really liked them,” he says. “It felt great that they wove the fabric of African-American history into the drama. They’re very different animals. In my film, we talk about the founding of Tulsa and what it meant and the destruction and why it was destroyed, not just that it happened, through official and documented accounts of Tulsa and Greenwood.”

While the fictional characters in Watchmen received reparations, Nelson says he hopes Tulsa Burning can finally make this happen for actual survivors and descendants alike.

“‘Reparations’ is a very fraught word. But in my film, you start understanding what reparations mean and the need for them,” Nelson says. “What form that can take, as someone in the film says, can mean many different manifestations. The story of Greenwood helps audiences at least understand some of what people mean by reparations.” 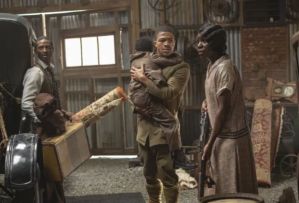 “This was a thriving Black community that was destroyed, and the victims who were murdered were buried in mass, unmarked graves,” he adds. “Those who lived were run out of town and were never apologized to, and the massacre was never investigated. My hope is that people who see the film will not only be moved by the story, but start to understand America’s history in a deeper way.”

In a time when viewers are holding Black creatives accountable for exploiting Black trauma, Nelson also argues that documentaries alleviate some of those concerns. 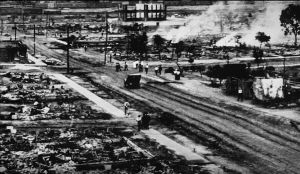 “A fictional series can show you trauma in a way that is, even if it’s accurate, feels like too much,” Nelson says. “Documentary films in general can’t do that. I definitely don’t think that Tulsa Burning does that. It’s very different to see people being shot in the head and burned out of their houses and shot when they come out.”

“In a documentary film, like ours, you have survivors telling you what happened. It’s hugely different,” he notes. “Personally, I find it hard to watch movies and shows portraying the cruelties and terror of enslavement. Not that it wasn’t done. Some of the films are too accurate. You can’t feel a documentary viscerally the same way, but you can tell the story in a moving and honest way. Documentary films can do things that fiction can’t, like include real people.”