Warning: This post contains spoilers for The Mighty Ducks: Game Changers‘ season finale. Avert your eyes if you haven’t seen the episode yet!

If there’s one thing you can count on, it’s The Mighty Ducks serving up a feel-good ending after overcoming stacked odds. Staying true to the franchise’s fighting underdog spirit, Game Changers delivered a heartwarming season ender that saw the Don’t Bothers claim the famed Duck name for themselves.

After forfeiting the state championship game due to Sofi’s injury, the Don’t Bothers faced the Ducks in an unsanctioned game for ownership of the coveted team moniker. Going all out for the high-stakes bout, they switched into the OG Ducks’ old green District 5 jerseys at the halfway point and scored the winning goal after pulling the classic Flying V. According to showrunner Steve Brill, who also created the series and wrote all three Mighty Ducks films, that storybook ending is how it was intended to go all along. 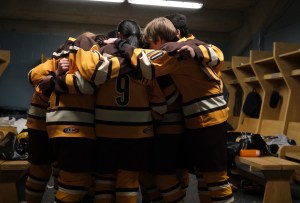 “That was the plan from the very beginning because, in my mind, The Mighty Ducks was always something that they needed to get back and recover and restore and recreate,” he shares with TVLine. “The fact that the whole thing wouldn’t necessarily be about winning, but winning back the Mighty Ducks name and then being able to start the next generation under that name, was the idea from the beginning. That was the ultimate prize.”

Brill opened up about that finale twist and teased what may come in Season 2 in our full interview, which you can check out below.

TVLINE | What does this mean for the Ducks who can no longer use the Duck name?
Those players get relegated to the dustbin, and they have come up with a new name. I always thought they were essentially the Hawks from the first movie, so maybe they’ll blend with the Hawks or try to get that name back. They’re going to resurface down the line as a darker force that would certainly want that name back, because that was their name, too. So maybe they’ll come back in the second season trying to get their name back.

TVLINE | It’s not like you can rename them Team Iceland.
Those guys could be coaching in Europe or the United States. It might be nice to do another reunion with the old Ducks playing the old Iceland at 45 years old.

TVLINE | Did the OG Ducks who appeared earlier this season know that the Don’t Bothers would be wearing their old jerseys in that unsanctioned game?
I don’t think they knew. We kept that secret because we snuck those jerseys into Episode 6 [the reunion episode], which I directed. Just like we always knew they’d be fighting for the title, I always knew that there would be a jersey switch midway through the game. It certainly would have been interesting to bring out the old the old Mighty Ducks of Anaheim jerseys [with the teal and purple across the bottom], but we decided to go all the way back.

TVLINE | How were the Ducks so unprepared to have their own move used against them?
The Mighty Ducks in our show didn’t take on the Flying V. They thought of that as a gimmick or a silly thing. They’ve lost their way. They don’t know a V from an X from a circle. They don’t know any of that, so that’s why it’s a surprise to them when they see it.

TVLINE | Did you ever consider incorporating social issues into this season?
I thought there was a case to be made for creating a COVID world. The last game that they played in, which was shot during COVID, those are all computer-generated people in the crowd. In the long run, COVID is just going to be a slice of history, and people will be out en masse. I just think we chose to depict a larger, longer reality than the one that exists, and I think we made a good choice. It’s open in the future to discuss how much we reflect social issues in the show. 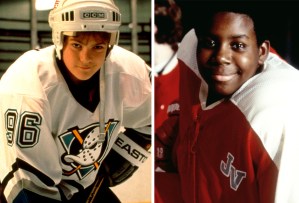 TVLINE | Joshua Jackson [who played Charlie Conway in the films] was unable to appear this season, so are you more determined to have him come back for Season 2 if the show gets renewed?
Josh and I talked about the whole series before it even started. We were in talks four years ago to do this show together, and then it wasn’t possible for him to even be in talks for the episodes that I did. For Season 2, I’d love to re-engage and explore that concept again, depending on his schedule… The question is, can he do a whole season? That’s a big commitment, and he’s always on another show. I really want to be able to write him a great role and a great arc in a season.

TVLINE | And Kenan Thompson?
Kenan and I [talked about]… he could come in next season and do at least an episode. He said he would, so I’m going to hold him to it.

TVLINE | Have you heard anything about Game Changers getting renewed for Season 2?
Disney wants to have the ability to look at all the numbers and algorithms of how things do through the platform. They said, “Let us wait until we finish all 10, and then we’ll decide.” I was like, “OK, but tick-tock, tick-tock. The kids are getting older, man.”

Did The Mighty Ducks: Game Changers hit the right ending? Grade the finale and the season below, and sound off in the comments!