After making a special trip to Earth to, among other things, see to it that siblings Lucifer, Michael and Amenadiel (played by Tom Ellis, Tom Ellis and DB Woodside) cease sparring and instead get along, all God (guest star Dennis Haysbert) wanted was “a nice family dinner.”

But what wound up on the menu in Lucifer‘s Season 5B premiere — besides a downright heavenly chicken recipe — was heated exchanges between Lucifer and Michael, some debate about the “reward” of lording over Hell, weighty questions about Fatherly love, and a booming demonstration of Old Testament wrath.

Luckily, dinner guest Linda (Rachael Harris) started the five of them out with two full bottles of wine, to wash it all down with!

Invited by God himself to break bread with them, Linda provided much comic relief, whether thanking the man at the head of the table for “oceans… and napkins… and shoes” when saying grace, or invoking his name when gushing over the aforementioned meal.

In fact, when the air in her dining room grew especially thick with familial tension, Linda lightened things up by blurting out this epiphany about the manna God had prepared for them: “Chicken! I get it! It’s your favorite. That’s why everything ‘tastes like chicken.'”

And hey, maybe she is right? 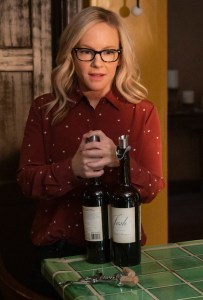 “The writing of that scene… we broke 75 times, just doing that scene,” Harris shares with TVLine. “It was so much fun. And Dennis [Haysbert] is really funny.”

In fact, the 13-minute family dinner scene took several days to shoot, not because of the barely stifled spittakes but “because Tom plays two characters in it,” and that exponentially adds to the intricacy of filming, Harris notes. “It was crazy.”

Yet as comically delicious as the feast with the self-diagnosed “most dysfunctional family ever” was, there was one thing Harris simply could not stomach about it.

“I hate that Michael character. I really hate him…,” she reports. And it’s not so much  because Lucifer’s twin is a sniveling weasel. No, “I just don’t like it when Tom speaks in an American accent,” Harris says, playfully defending Ellis’ English voice. “It’s very disconcerting!”

What did you think of Lucifer‘s return, titled “Family Dinner”?