For four-and-a-half seasons, Lucifer‘s friends and colleagues danced with the devil. But in the musical episode “Bloody Celestial Karaoke Jam,” they got to sing with him, too.

The second episode of Season 5B found Lucifer & Co. breaking out in song at the visiting God’s whim. The playlist kicked off with “Another One Bites the Dust” (sung at a football field crime scene), followed by covers of “Every Breath You Take” (featuring guest star Debbie Gibson), a “Bad to the Bone”/”No Scrubs” mashup, “Hell,” “Wicked Games,” “Just the Two of Us,” “Smile” and “I Dreamed a Dream.”

The ambitious undertaking, written by co-showrunner Ildy Modrovich and directed by Sherwin Shilati, was a helluva lot of fun — as well as hard work — Aimee Garcia tells TVLine.

The football number “was so big,” with scores of professional dancers and “cameras that were as tall as dinosaurs,” Ella’s portrayer recalls. After rehearsal and only a couple of takes, “we were losing the light, but it was one of those magical, lightning-in-a-bottle moments where you have 200 dancers and singers and actors and other sorts of artists, and all of our adrenalines are pumping. When we finished, we felt like we just finished a Broadway run…. The energy was fantastic, so that [number] definitely stands out in my head.” 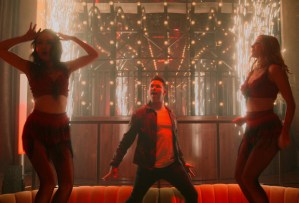 Both being dancers, Garcia says that she and Kevin Alejandro, who plays Dan, “were like kids in a candy store” during the sprawling football performance. (Once a b-boy, Alejandro “was trying to do some move, and I don’t know if it worked or not, but he committed,” Garcia reports.) And while series leads Tom Ellis and Lauren German did not enjoy as much rehearsal time, “you would never know it because they crushed it,” Garcia asserts.

In fact, Chloe’s portrayer let loose with at least one improvised (and saucy) move, bending at the waist to twerk in front of Ellis at one point. “That was total Germ being Germ!” confirms Garcia. “I always say she’s the funniest one in the cast, so of course she just went for it.”

There’s also some hair being whipped throughout “Another One Bites the Dust,” but not always in the name of choreography. “If we couldn’t remember the lyrics, we would put our hair in our face,” Garcia sheepishly shares. 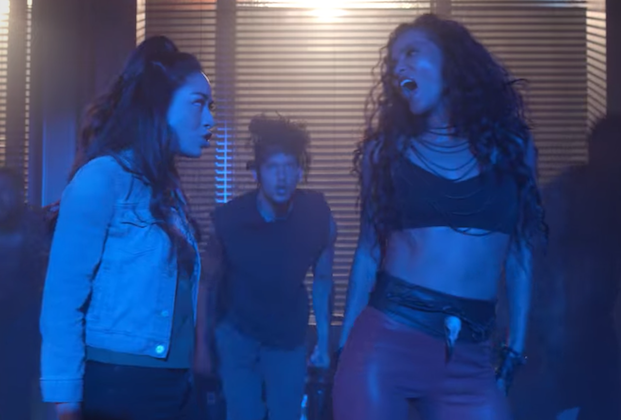 Garcia later teamed with Lesley-Ann Brandt for “Bad to the Bone”/”No Scrubs,” in which Maze embraces her demonic leanings while Ella labors to steer clear of bad boys. The beefy backup dancers who flanked Maze made for “much testosterone,” while Brandt “looked incredible in her outfit,” Garcia recalls. “Those muscles and abs and tiny waist don’t look real, but they are.”

Brandt herself tells us, “I really tried to channel for that one a little Grace Jones and Rihanna,” adding with a laugh: “I got a lot of bruises on my knees, climbing on that table!”

Garcia also got banged up, bruising a bone near her foot, but choreographer Brooke Lipton and several of the dancers on hand rode to her rescue with ice packs, massages and other pro tips to tough out the final take. “That dancer community is so solid; they literally had my back,” she says. 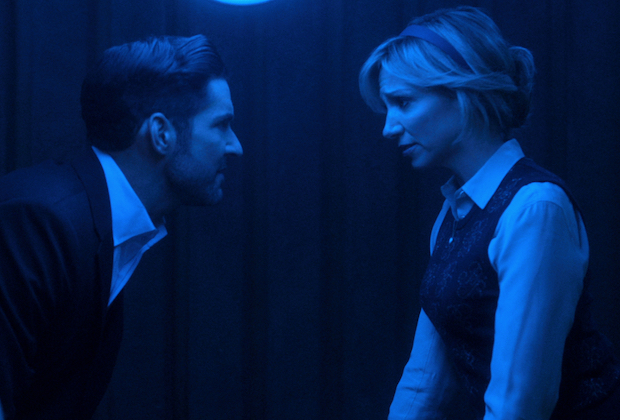 Gibson brought The Police to the cop shop

Garcia also sings in this season’s penultimate episode, alongside Tom Ellis. And while we won’t spoil the why and where of that here, her “BTS freak-out story” about that performance involves going from having months to prepare to one week, a last-minute song change, and then getting the OK from director/EP Ildy Modrovich to sing her part in Spanish.

But back to the musical episode…. “I can’t wait for people to see everyone sing,” Garcia effuses. “We were all terrified, and I think shots of tequila were downed before people went into the recording booth, but it’s all out there now!”