Jennifer Quail, a wine tasting consultant from Dowagiac, Mich., finished in second place, winning $100,000, while Veronica Vichit-Vadakan, a reference and instruction librarian from Portland, Ore., netted $50,000 with her third-place win. 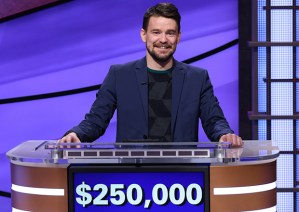 Jeopardy! is matching Kavanaugh’s winnings with a $250,000 donation to the Hope of the Valley Trebek Center for the Homeless, in honor of Alex Trebek. According to a release from the show, “the Trebek Center will assist up to 300 people per year with shelter, intensive case management, mental health services, job training and placement, substance abuse counseling, housing navigation, life skill training, and medical care.”

“It’s so wonderful that Jeopardy! is supporting [the Hope of the Valley Trebek Center for the Homeless],” Jean Trebek said of the donation. The show’s generosity continues to reflect Alex’s desire to assist underrepresented communities,” the late host’s wife Jean Trebek said in a statement.

In addition to wrapping up the Tournament of Champions, Friday’s episode also marked the end of a 10-day hosting streak for Buzzy Cohen, who won the tournament himself back in 2017. Call Me Kat star Mayim Bialik will begin her run as guest host beginning Monday, May 31.

What did you think of this tournament, and of Cohen as its buzzy host? Weigh in via our polls below, then drop a comment with more of your thoughts.