In Thursday’s penultimate Season 17 Grey’s Anatomy, babies were the hot topic, not only with Jo, whose attachment to ill-fated Val’s newborn Luna has been growing stronger with every scene, but Link, who the promo suggested was keen on expanding his and Amelia’s mom-and-pop operation. Of course, we all know how misleading Grey’s promos can be. So did the ortho god really want to give Scout a kid brother or sister? Read on…

‘GUESTS DON’T BRING OTHER GUESTS — I GREW UP IN A CAR, AND I KNOW THAT’ | As “I’m Still Standing” began — Week 1 — Amelia tended to Meredith, serving her a sandwich with “the weirdest meat-to-cheese ratio I’ve ever known,” then headed to Grey Sloan, where she’d taken over Koracick’s service. While Jo adjusted to having Taryn as a spare roommate, Levi learned that he’d been accepted into a COVID vaccine trial. At the hospital, Winston and Maggie planned their wedding, and Teddy informed Owen that Tom had left Seattle with Jackson to save the world. Shortly, Jo and Cormac met officious social worker Carmen, who’d been assigned legal guardianship of Luna. Nearby, Richard, Maggie and Helm tended to a patient named Gwen who was in need of a heart donor and had basically given up on life, having lost her husband and dog. At the same time, Amelia and Owen prepared to perform surgery on a young woman named Skyler whose father was especially tense. And handsome Dr. Mason Post administered the vaccine to a nervous Levi. (Nico who?) Afterwards, Levi summed up his task thusly: “Now all I have to do is not die.” 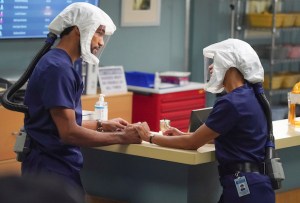 A commercial break later, we were in Week 2, at which point Bailey paid a visit to Meredith, who was stunned to learn about Ben’s recent, wholly successful surgery. Gwen, meanwhile, had Winston paged because she wanted to meet the man that Maggie was marrying. And Levi seemed to be warming, awkwardly, to the idea of flirting with Mason. (Whether Mason was flirting remained… unclear.) During a moment with Nico, Levi was tasked with clarifying their relationship. Nico didn’t want to see other people, he insisted. “I want you and only you.” Oh, since when, Nico? In peds, a distracted Carmen thanked Jo and Cormac for making it so easy not to think at all about Luna. “You could think about her a little,” huffed Jo. Outside the hospital, Amelia was forced to report to Skyler’s dad that she still hadn’t regained consciousness and might need another procedure. The absentee parent had seen COVID as a second chance to get to know his daughter. So, sadly, he OK’d the additional procedure, so long as Skyler wasn’t in any pain. 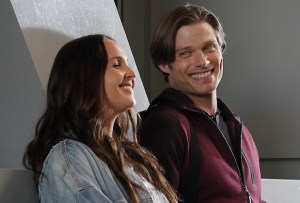 ‘PRETTY CRAZY TO THINK WE’RE ALL WALKING AROUND ON A PAIR OF MATCH STICKS’ | On Week 3, Link ran into Jo, who was perturbed by Carmen’s disinterest in Luna. He cracked that duh, of course Jo was going to adopt the baby. “I completely freaking love her,” she admitted. You can stop asking yourself if you can raise a kid alone, Link told his pal. You already are. At the same time, Winston suggested that he and Maggie turn their wedding into a puzzle that they could solve together. She dragged her feet, though. She didn’t want the ceremony to feel like a compromise. Wait, what? Saved by the text, Maggie learned that they had a donor for Gwen. Nearby, Amelia doubled down on her efforts to save Skyler. “I’m a mom now, I can’t give up,” she told Owen. At last, Levi and Mason confirmed that they were flirting. (Now can we say, “Bye, Nico?”) That night, Link admitted to Amelia that he wanted more kids. “I love being a dad,” he exclaimed. “I think I want more.” Cue Amelia’s panicked expression in 3, 2… 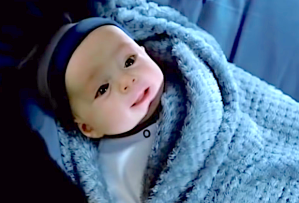 In Week 4, Bailey paid another visit to Mer, at which point Grey shared “some of the many gifts” she might have received compliments of COVID. She might not even be able to stand long enough to perform surgery again, Mer warned. “What I want is my life back.” And she wasn’t sure, or even hopeful, that she was going to get it. While Amelia worked on Skyler, Link phoned in playing his guitar for Scout — which miraculously stimulated brain activity in the patient (or so I gleaned). From there, Amelia formulated a method of asking Skyler questions that she could answer in. Her. Brain. Whoa. Elsewhere, Maggie reported that Gwen showed no signs of organ rejection. Unfortunately, she had awakened with a headache; had she had a stroke? In peds, Jo was horrified to discover that Luna had stopped breathing after eating. Whew. Cormac was able to get the baby’s heart beating again. Afterwards, Jo couldn’t deny it a second longer. “I want to be her mom,” she tearfully admitted. 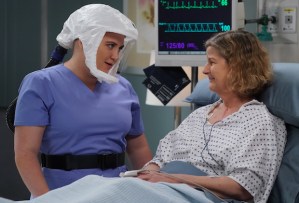 ‘I JUST DON’T THINK I CAN MAKE OUT WITH MYSELF’ | In Week 5, Amelia reported that she couldn’t figure out why Gwen was having headaches. Suddenly, it dawned on Maggie and Richard — that she just didn’t want to leave the hospital. Once busted, Gwen confessed that she just wanted to stay. “I have friends here — the nurses and doctors,” she said. “I’m not very good at people. My husband was, not me.” But at Grey Sloan, she was accepted. Liked, even. In peds, Jo admitted to Cormac that yep, she’d been there all night. If she’d gone into cardiac arrest and had a tube shoved down her throat, she wouldn’t have wanted to be alone. During a private moment with Winston, Maggie insisted that she hadn’t been saying that she didn’t want to get married, she’d just wanted it to feel right. They could talk about it later, he said. Clearly, it could wait. In other developments, Amelia was able to let Skyler’s dad talk to her using her innovative yes/no brain-scan method. (Though I shuddered to think what her copay was going to be… !) 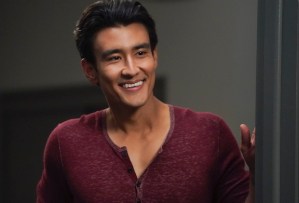 At the start of Week 6, Mason came right out and asked Levi out. Or, rather, in. “I’ll text you my address and see how the rest of your day goes,” said the new doc. “I hope you’re at the end of it.” In peds, Carmen rejected Cormac’s idea to perform surgery on Luna. She also expressed her sympathy for Jo, whose application to adopt the baby had been denied; she’d failed the background check. At Grey’s, Bailey pitched the idea that Mer take over the residency program. Richard had too many jobs as it was, and one day, he’d want to step back. “I need somebody who thinks like me,” said Miranda. “I need you to put together a team that reflects our world” and make that world better. As the episode drew to a close, Taryn reunited Gwen with her dog, Jupiter (and told the patient to call anytime). Instead of show up at Mason’s door, Levi went to Nico’s. All together now: Ugh. “I panicked because I love you,” Schmitt said. He just wasn’t used to his awful boyfriend feeling it back. But at least it did seem that Nico was sincere in his change of heart. OK, maybe I could get behind this. (You?)

At the hospital with Owen, Amelia blurted out that she didn’t want any more kids. “I always thought I wanted four or five… ” But nope. Not now. Hell, she was losing herself so badly that she hadn’t even been to a meeting in weeks. In response, Owen advised his ex to just be honest with Link. (Instead, Amelia hid out from her babydaddy at Mer’s.) At Jo’s, Taryn asked if her landlady was OK. She was not. So “you can live here or you can talk, but you can’t do both,” Wilson said as she crawled into bed and began to sob. And Maggie said that her and Winston’s wedding would never be perfect because her mom wasn’t going to be there. It had had nothing to do with him. So she suggested that they turn the engagement ring that Diane had given her into a wedding band and tie the knot asap with just close family. Fine by him — which was a good thing, too, as she just happened to have waiting in the parking lot… his grandma and her adoptive dad!

So, what did you think of “I’m Still Standing”? Jo’s heartache? Levi and Nico’s reunion? Mer’s new role? Hit the comments.