Warning: The following contains spoilers for Wednesday’s The Bold Type premiere. Proceed at your own risk.

A contentious Bold Type romance has come to an end. During Wednesday’s fifth and final season premiere, Kat repeatedly ignored Eva’s texts after hooking up with the Republican Scarlet board member. When the two finally came face-to-face, Kat admitted that, as a biracial queer liberal, she didn’t like herself following their tryst.

“It’s not just that we see the world differently. It’s the things you believe, the things that you work to protect, those things hurt people like me,” Kat explained, adding that she wants to be proud of who she’s sleeping with.

Last July, star Aisha Dee took aim at her character Kat’s flirtation with Eva, writing on Instagram that “the decision to have Kat enter into a relationship with a privileged conservative woman felt confusing and out of character.”

“Despite my personal feelings about the choice, I tried my best to tell the story with honesty, even though the Kat I know and love would never make these choices,” Dee continued. “It was heartbreaking to watch Kat’s story turn into a redemption story for someone else, someone who is complicit in the oppression of so many. Someone [whose] politics are actively harmful to her communities.”

In the wake of Dee’s criticisms, “we had a lot of conversations,” showrunner Wendy Straker Hauser told TVLine during a recent interview. “We always really do try to have an open dialogue, and so many of our storylines are collaborative.” 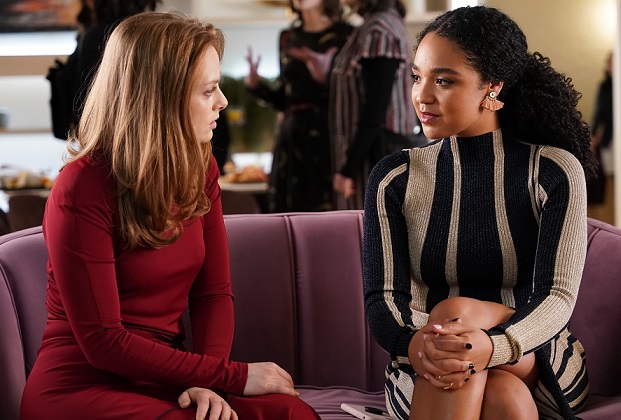 This week’s premiere was about “what feels right and good and also right by the character of Eva and the character of Kat, and then, individually, the person who is Aisha,” Hauser says. “We just sort of came to a good place where we would be authentic and not villainize certain characters, but also have interesting conversations and create a resolution to that storyline that felt real and true to Aisha and also to Kat’s character.”

Hauser also notes that the end of Kat and Eva’s relationship was “always planned” — but the pandemic production shutdown and the show’s abbreviated six-episode final run did speed up the pair’s demise.

“This was always part of what we had thought was Kat’s arc of just being able to fall for somebody, have open dialogue, potentially have them learn and grow from each other and perhaps even Eva’s mind would be opened and changed on certain levels with certain things,” Hauser shares, “and Kat could see other things, and they could kind of make the world a better place, which is like the dream that we all have, I think, on some level, that we can go across the aisle and we can start to begin to repair and work together. But we didn’t have the space to finish out that storyline, and so, given the short season that we had this year, we altered things a bit and ultimately got to the same place, but a lot faster.”

The Bold Type fans, what did you think of the season opener? Grade it below, then hit the comments!