The uncredited character in Master of None Season 3 is Denise and Alicia’s enviable upstate New York cottage and farm. There’s just one problem: Only the exterior exists… and it’s located in the English countryside.

The interior — which includes a majestic stained-glass bedroom window, a hallway reading nook that begs you to curl up with a copy of anything by Toni Morrison, and replicas of art that co-writer/co-star Lena Waithe actually owns — exists solely on a London soundstage.

“I really wanted to design a house,” says production designer Amy Williams, “that has weird anomalies and personalities like we have.”

The end result is a farmhouse straight out of the pages of House Beautiful and a gorgeously green palatial farm replete with chicken and sheep. 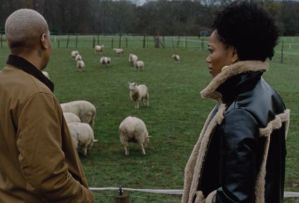 Naomi Ackie, who stars as Denise’s wife Alicia on the Netflix series, also marveled at the attention to detail from Williams and series co-creator/director Aziz Ansari, which made the cottage seem like it could be their home.

“We shot in London and worked with actors who could do American accents,” the UK native divulges to TVLine. “Amy, who designed the interior, found a beautiful house and kind of followed a model of the inside of it and designed that for the soundstage, so she could design it the way she wanted.”

“I hate to destroy the fantasy because it was such a beautiful house,” Ackie compassionately adds. “And there was so much of Lena and me in it. Aziz had Lena and me take pictures of the inside of our own houses and things like that.” 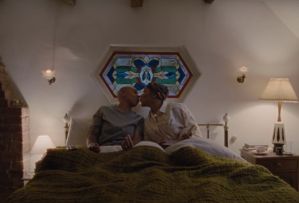 That’s why the art and decor felt so organic and cozy, she says.

“Lena is really into art, for instance, and there were photographs that I have in my house,” she concludes. “Aziz used that to personalize the space and create a mix of our styles alongside Amy’s design. Even the books are books that we have been reading in our homes.”

Did you finish binge-watching Master of None Season 3 already? Give the finale a grade in our poll: