Warning: This post contains spoilers from Wednesday’s Chicago P.D. finale. Read at your own risk.

Chicago P.D.‘s LaRoyce Hawkins teased an emotionally charged finale that would challenge Intelligence’s concept of reform, and the intense hour certainly delivered on that promise.

With Burgess missing and too many potential leads to follow, the team found themselves split on how to proceed since time was running out. After all, they were dealing with the same crime ring that trafficked and murdered a handful of young women and girls when they realized the police were onto them. 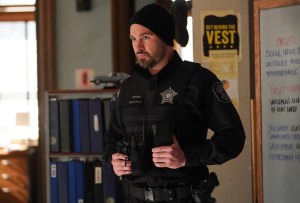 A distraught Ruzek couldn’t keep his head straight throughout the episode. He leapt into the river when he thought Burgess was in the backseat of the car that had been dumped there, had an emotional outburst with Voight about not moving fast enough to find her, and exchanged blows with Atwater for wanting to go by the book rather than blindly chasing a bunch of time-consuming potential leads. In an emotional one-on-one, Upton reminded him that he’ll need to step up for Makayla if something happens to Burgess and urged him to go be with the young girl because he’s too emotional for police work right now.

Elsewhere, Burgess tried to reason with her abductor, who would not budge since he was already done for, given his involvement with the trafficking ring. His partner then appeared to tie up loose ends, immediately shooting both him and Burgess before disappearing. Burgess played dead before searching through her deceased abductor’s pockets for means to free herself. She used his belt to stop the bleeding in her abdomen before desperately crawling toward the exit. She made her way outside and to an abandoned car, and mustered up enough strength to bust the window with a brick before passing out in the driver’s seat.

Back at the station, Halstead argued they should go by the book and follow their lead on the Buick, which could potentially lead them to Burgess’ attacker. Voight decided they should do both and so split everyone up. Atwater and Halstead would chase their car lead, while Ruzek and Upton went door-to-door. After coming up empty numerous times, Upton realized that Voight kept the stronger leads for himself.

Her hunch was right — Voight went out alone and reverted back to his old ways of violently interrogating suspects for information. One particular lead mentioned Burgess and her daughter Makayla, prompting Voight to cuff and assault him until he divulged Burgess’ whereabouts. Upton followed up on Voight’s leads and walked in on the disturbing scene.

Going by the book worked out for Atwater and Halstead, who traced their lead all the way to Burgess. Finding her unconscious and with barely a pulse, they rushed her to Chicago Med and informed the rest of the team. Although she lost a lot of blood, Burgess was “fighting.” 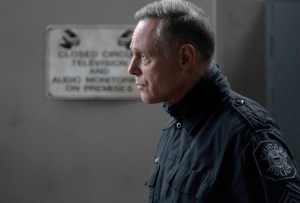 Upton tried to talk Voight down from the ledge, noting that Burgess was still alive and he could still find a way out of this. Voight pushed back, asking her what she expected would happen when she followed up on him. This guy needed to pay for his role in Burgess’ kidnapping, after all. Upton then pleaded with Voight to do the right thing, reminding him of his previous speeches urging her not to be like him and cross a line she can’t come back from. Voight ultimately caved and decided to uncuff the suspect, who used the opportunity to attack Voight. Upton fired off several verbal warnings before shooting the man dead. Before she could call it in, though, Voight stopped her and told her he would handle it.

Back at her apartment, a shaken-up Upton found Halstead getting ready to visit Burgess at the hospital. The hour ended with Halstead comforting her, and Upton telling him she loves him before suggesting they get married. Wait, what?

A final scene revealed what Voight meant by handling things: He dug a grave and burned the body to get rid of all traces of their involvement in the shooting. So much for reform.

What did you all think of that finale? Grade it below, and let us know your thoughts in the comments.