Warning: This post contains spoilers from the Season 3 finale of Netflix’s Master of None.

There was so much animus between Denise and Alicia at one point that it seemed like they would never reconcile on Master of None.

But when Denise’s car rounded those breathtakingly scenic country roads and stopped at the beginning of Episode 5, it was Alicia who Denise jumped out to hug before the two drove away together. Soon after, viewers learned that Denise had lied to her wife Erika and said she was attending a writing retreat, and Alicia had deceived her new wife Regina and said she was enjoying a weekend alone.

Denise also had a surprise for Alicia — a weekend rendezvous at their old upstate New York cottage, which was now available on Airbnb several years after they’d sold it as a part of the divorce. 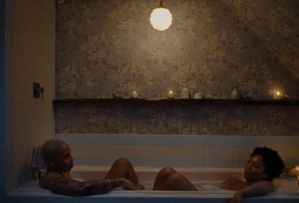 The two women laughed, exchanged gifts, danced, ate good food and reminisced about the past. Alicia shared stories about her daughter Lorna, and Denise shared details about her two-year-old son Justin. They even compared notes about their weddings, and Denise lamented that Alicia had stolen the caterer she’d recommended when they got married. Later, during a sexy and intimate bath, Denise also said that her new wife Erika wasn’t boring, but “she’s just not you.”

By episode’s end, Denise shared a heated Moon Pie with Alicia in bed as they cuddled and wondered “what if.” And then the film fluttered and cut to Denise smoking a cigarette alone. Did the fluttering mean that Denise imagined the reunion in her mind, or could it be interpreted as just another lovely moment in Denise’s life that she can’t hold onto?

Naomi Ackie, who plays Alicia opposite Lena Waithe’s Denise has theories, but she can’t share them. 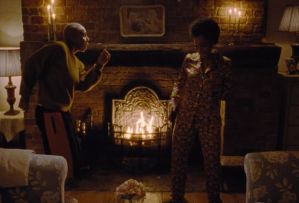 “I love that. Oh, God. [Series co-creator] Aziz [Ansari] would kill me. But I feel like we all just wanted to leave it ambiguous and play with the idea that it’s just in her head,” Ackie tells TVLine. “Then again, it could be real, and they’re in a messy part of their evolving relationship. It really is up for grabs, to be honest. There were some instances where we made one or the other more obvious, but where it’s at now is a happy medium. That way, people can see it how they want to see it.”

“There are couples who don’t work together on a practical plane, but they’re great as secret lovers. That stuff happens,” Ackie adds. “The best part for me is that this story is messy all over the place, just like real relationships are. There’s not one villain, and there’s not one victim. They both do each other dirty. They both want different things, and then they kind of want the same things at the same time. And they love each other, but there’s resentment there, and it felt like the ending really honored all of that.”

Give the Master of None Season 3 finale a grade in our poll, weigh in on Denise’s “dream” and then drop your thoughts in a comment below.