For four years, Black Lightning has positioned itself as a show larger and greater than its titular character’s super powers.

It was a series about hope, the Black community and family. And when the CW series came to an end on Monday, those same themes emerged as the Pierces regained their super powers and took down the bad guys. Before Jeff/Black Lightning could dig his way out of the grave Tobias trapped him in, buried alive, he had to mentally confront his father’s murder as well as the murder he himself committed as a kid, even though the latter was for the greater good.

Once he did, Jeff used an energy source from deep within the earth to regain his powers and confront Tobias to end his reign of terror. During their overdue fight, Tobias even used one of his signature SAT words — “defenestration” — which is a fancy way of saying Tobias planned to throw him out the window. But, alas, it was Black Lightning who threw Tobias out that window, and when he did, Tobias was impaled on a rod and killed. After death, Tobias aged and looked like the septuagenarian he truly was. 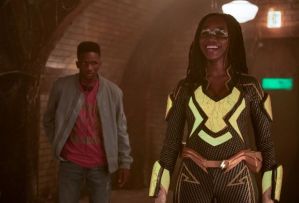 Next up was JJ, who headed to the tunnels to take down Chief Lopez with TC by her side and instead ended up being confronted by the real Jennifer, who was able to return to her original form in the ionosphere. Leading up to the fight, JJ explained that she hated Jennifer for being free, having flesh and coming and going in the glaze, aka ionosphere, as she pleased. While no one thinks Laura Kariuki, the actress who played JJ, hates China Anne McClain, who starred as Jennifer, it was a meta meta moment to have a replacement actress beat up the original.

But Salim Akil, who created and executive-produced Black Lightning, says there were nothing but loving feelings on the set while shooting the show’s final installment.

“It was great to have China back,” Akil tells TVLine. “China is an amazing actress and an amazing talent. She can sing, and she’s a wonderful person. She always lights up the set whenever she’s there, and everyone was happy to have her back. She’s like family, and it’s always good to have a family reunion when everyone is cool.” 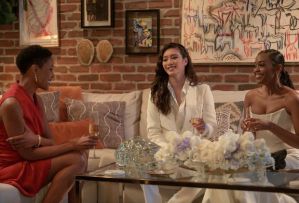 After eliminating JJ, Jennifer fought with Lopez and took her out, and just like that, order was once again restored in Freeland. Jeff, Lynn, Gambi, Anissa, Jennifer and TC celebrated, and Jeff announced his retirement by passing the torch to his daughters and saying that if they needed him, he would always be around.

Meanwhile, TC helped cure Painkiller of his “kill order” against the Pierces, but that also meant that he would no longer remember Jennifer. This is almost as heartbreaking as fans learning Monday that The CW will not be giving Painkiller his own spinoff series after all. The episode and the series ended with Lala emerging from the rock Destiny trapped him in and reveling in Tobias’ death. “Somebody finally stuck it to your ass,” Lala said, ending the series with a laugh that Akil says actor Will Catlett improvised.

“He’s exactly who I thought he was,” Akil says of the unscripted dig. “Will is an outstanding actor and an outstanding person. I got excited the moment I heard it. I popped up, but I couldn’t say anything because we were still rolling.”

What did you think of the Black Lightning series finale? Give the finale a grade in our poll, and then drop your thoughts in a comment below.