Now that the head-scratching decisions have been made, the dubious song selections have been executed — literally, it’s sometimes seemed — and we’ve all heard the Welcome to Team Legend ditty about a bazillion times, Season 20 of The Voice has come down to the big question mark looming over the competition.

No, not “How are we going to survive on only one cycle of the NBC sing-off next year?” but “Which of the Final Five is going to win?” I think I can answer that question, too — correctly, even. (Somehow I managed to accurately prognosticate the victor in Seasons 19 and 18. Before that, erm… my track record was as much miss as hit.)

So, with an ear on the remaining contenders’ past performances and an eye on voting patterns (both on the show and in TVLine’s post-recap polls), I’d say that… 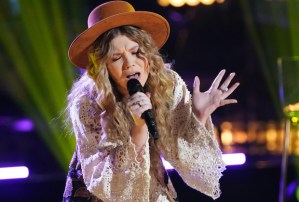 … Rachel Mac (Team Nick) has a two-percent chance of winning. Though she’s never had to be thrown a lifeline by her coach or compete for the Wildcard Instant Save, the self-proclaimed Blake superfan is still the dark horse to win, owing to uneven performances (that Semi-Finals train wreck… ugh!) and a coach who’s yet to prove that he can get his team votes merely by requesting them.

… Jordan Matthew Young (Team Blake) has a five-percent chance of winning. With the support of his coach’s massive fan base, and enough experience not to let nerves undermine him in the home stretch, this likable blue-collar blond is a shoo-in for… well, a third-place finish. He has, after all, needed to be saved by both Blake and the Wildcard. 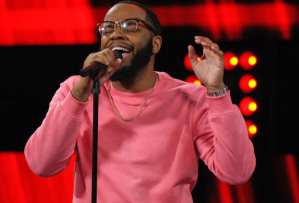 … Victor Solomon (Team Legend) has a 10-percent chance of winning. Don’t get me wrong, the gospel singer is a fine, sometimes even heavenly, vocalist. He’s just never generated any buzz, much less the kind that is powering the two contestants to whom this competition has really come down.

… Cam Anthony has a 41-percent chance of winning. Though the 19-year-old’s powerful pipes and polished performances have made him not only Team Blake’s standout but inarguably the entire season’s standout, I suspect that he’s going to wind up in second place. Why, when he’s so superlative (and even I’m pulling for him)? Four words: the massive country vote. 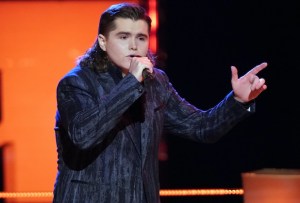 … Kenzie Wheeler has a 42-percent chance of winning. No, he’s not as reliable or nuanced a performer as Cam. Nor does Kenzie have his stiffest competition’s range or showmanship. But Team Kelly’s 22-year-old cowboy is nonetheless more than an appealing “aw, shucks” personality and a memorable mullet. When he’s good, he’s dang good, as he himself might say. Combined with the fact that he’s the only country-through-and-through contestant in the Final Five, that, I’m wagering, is going to score him the victory.

What do you think? Which of the Final Five should win, and which actually will? Vote in the polls below, then hit the comments to back up your response.