All season long, The Equalizer‘s Delilah has wondered what her mom really does for a living.

Every time she asked Robyn, and later Aunt Vi, the two stuck to their story that Robyn works for a nonprofit. And Robyn, with a few exceptions, did a great job of deceiving Delilah and protecting her daughter from her secret life equalizing injustices in the world. This all came crashing down in Sunday night’s Season 1 finale, titled “Reckoning,” when Delilah and her friends skipped school to hang out in a “rough” part of town.

The four were innocently walking down the street, laughing and taking selfies, when an unmarked van pulled up and opened fire on a rotund man standing nearby. But bullets don’t have names on them, and in the process of shooting and killing the man, the gunman accidentally shot Delilah’s crush, who later died.

Distraught that her friend Jason could be killed so randomly and thoughtlessly, Delilah told the police she would testify against the gunman because she had seen his face. The other two kids who survived the shooting had also seen the shooter, but recanted their statements after the Eastern European gangsters behind the shooting threatened their lives. Determined to make the shooter pay, and angered by the threat against Delilah and the others, Robyn turned to Mel and Harry who helped her find the motive and criminals behind the shooting.

Turns out, the Eastern European gangsters were warring with a local Latino cartel and things had gotten messy. Robyn confronted the cartel boss and found out they were holding the shooter’s girlfriend hostage. She freed the woman and followed her home where, of course, the shooter was hiding. Instead of doling out the punishment she wanted to, Robyn called Det. Dante so he could arrest the guy (after she tied him up first). Unfortunately for Robyn, Delilah and her friends, the Eastern European gangsters paid the shooter’s bail and he got out of jail in no time. 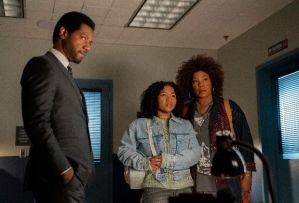 More determined than ever, Delilah went to Dante and said she was still going to testify, threats and all. While sitting at his desk, Delilah spotted a photo of Robyn and wondered why this cop had her mom’s picture. Curious, Delilah later tested Robyn by asking her if she knew Det. Dante, but Robyn said no. Later that night, when Robyn left to handle the Eastern European gangsters, Delilah hid in the back of her car and snuck out after Robyn left on her motorcycle to discover her mother’s secret hideout and cache full of guns, wigs and passports with various aliases.

As Delilah pieced together the truth, Robyn rolled up on the Eastern European gangsters to put a stop to their threats — and she brought the cartel dudes with her. The cartel boss and his gang wiped out a good chunk of the gangsters before attempting to turn on Robyn, but Mel had her back and shot some of them, too. 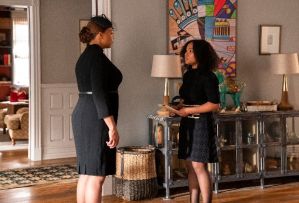 Robyn then set her sights on the Eastern European boss, Victor, who along with the shooter tried to mow her down with their SUV. Robyn, though, is a great shot and she killed them both and strutted away. When Dante and the other officers found the bodies, he said he would probably leave Robyn alone because she really was helping him find justice in the world. But, he warned, even if he stopped trying to expose her, somebody else on the police force would.

The following day, when Robyn, Delilah and Aunt Vi returned from Jason’s funeral, Delilah decided to confront Robyn about her motorcycle, Dante, the arsenal of guns, wigs and passports, and the story on the news that the shooter and his crew were dead.

“For starters, who are you?” Delilah asked before the finale came to an end.

Give The Equalizer Season 1 finale a grade in our poll, then drop your thoughts in a comment below.