Warning: This post contains spoilers from Season 3, Episode 4 of Netflix’s Master of None.

In any number of narratives, the dissolution of a relationship marks the end of the story.

But for Master of None Season 3, which focuses on Denise (played by Lena Waithe) and her wife Alicia (Star Wars: Episode IX — The Rise of Skywalker’s Naomi Ackie), the story not only keeps going but sharpens its gaze on Alicia and her desire to have a child. As fans of Master of None know, this is also a marked departure from the life and interests of the relationship comedy’s leading man Dev, played by co-creator Aziz Ansari, now that the show has returned following a four-year hiatus.

Back to Alicia. While her previous child-bearing attempt and miscarriage was one of the reasons her marriage to Denise crumpled, Denise’s dishonesty about wanting to become a parent and infidelity from both women caused them to get divorced.

Despite this, Alicia’s dream of motherhood remained and her fertility struggles and eventual triumph set the stage for a captivating and emotionally wrenching Episode 4 that is already garnering Ackie critical acclaim.

British-born Ackie, who will next star as the late, great Whitney Houston in the biopic I Wanna Dance With Somebody, spoke with TVLine about playing Alicia and how she relied on emotional intelligence instead of research to bring her character’s tumultuous journey to motherhood to life.

TVLINE | How do you prepare for something like this? Do you talk to women who have had similar struggles? How do you get in that headspace?
I know what you mean. The interesting thing about working with Aziz is that he does a lot of research and he’s always working with experts throughout the whole filming. Like, we had IVF doctors on set and he had been interviewing some of his friends who had gone through the IVF journey. For me, I kind of wanted to strike this balance between knowing the story I was telling but also stepping into Alicia’s shoes and being like, “Well, she didn’t know the complications going in. She just wants the baby.” I kind of held off a lot on deep-dive research because I didn’t require it. Luckily, it was a condensed shoot and we shot through COVID. It was quite a stressful thing and we were closed off anyway. I was able to tap into some of my actual frustrations and have them come through in the performance. 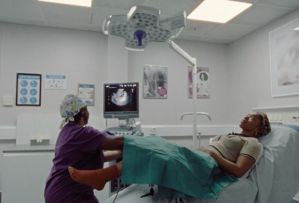 TVLINE | Way to channel that. Speaking of which, was there any scene that was especially grueling or that really put you through it?
Probably the scenes where she’s having the scans. There’s something about being a woman, and guys don’t know this, right? It’s something about being a woman and having your feet in stirrups and having your legs wide open while everything is going on up in there with the doctor. You’re just very vulnerable. [Chuckles]

It doesn’t get more vulnerable and I knew it wasn’t real but I could feel myself recoiling. I can’t imagine having to do that every day, or like twice a week, and how invasive that is. Us women, we do that. We do that without even really thinking about it. That was one of the hardest ones. And dealing with Alicia going through the paces of having a miscarriage and receiving the bad news and stuff like that. I’ve never had a child or tried to have a child, not yet. Some of those things felt like they were too far away from me but thankfully, by the time I got there, my empathy chip kicked in and I understood. Everyone knows what loss and disappointment feels like and that’s where I went with it. 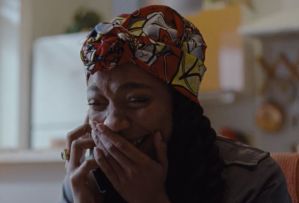 TVLINE | Right, to build all your hopes and dreams around this one improbable thing. That’s why they call it a miracle.
And that’s what I loved. Episode 4 is such a punch-the-air moment when Alicia gets what she wants. I find it really touching and how she calls her mum and tells her the good news. Cordelia [Blair], the actress who plays my nurse, was so magical. She was a supporting artist and she was so magical on camera Aziz was like, “Oh my gosh. Pull her in.” So, he wrote more scenes for her. That was the freedom and improvisation was just a really big part of it. We weren’t always improvising when the camera was on but we would improvise around the idea that we wanted to show and we would just insert it into the scene.