It sure looks like we found out who killed Erin McMenamin in Mare of Easttown‘s penultimate episode… but the killer might be looking to add to the body count.

Sunday’s episode opens with Mare waking up in the hospital after killing Potts and saving Katie Bailey and Missy. She’s a hero now, with the press mobbing her as she returns home, but Colin is still dead (R.I.P.), and Potts couldn’t have killed Erin because he was out of town that night. Plus, Deacon Mark insists he didn’t kill her in a teary interview with the cops, but they place him under arrest anyway after fishing Erin’s bike out of the river, and a forensics expert says the gun that killed Erin was an old cop gun, a kind that hasn’t been produced in decades. 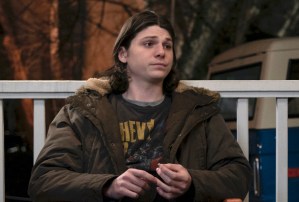 After Brianna tells the cops about Dylan going missing that night, they haul Erin’s ex back in for more questioning, and he stammers his way through a few lies, claiming he just couldn’t sleep and drove around for a while. When Mare reveals she knows that he stole Erin’s old journals, he asks for a lawyer — and she says he’s now the prime suspect in the case. But when Beth tells Mare she hasn’t heard from Freddie in days, Mare checks on him and finds him dead with a needle in his arm… and also finds an old jersey that says “McMenamin” and a Ross family reunion T-shirt among his stuff. At his funeral, Lori explains that the family reunion was a way to help cheer up Erin after her mom died. Erin shared a cabin there with her dad Kenny… and with John’s brother Billy. 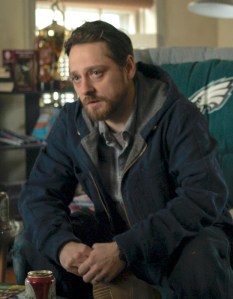 Speaking of Billy, John’s father (hey, it’s Gordon Clapp from NYPD Blue!) fesses up that he found Billy covered in blood and frantically washing his clothes the night Erin died. Mare finds photos online of Billy leering at Erin at the reunion, and she digs up the fact that Erin’s pendant — that’s inscribed with the date of the family reunion, hmmm — was purchased under the name of “Ross,” too. John confronts his brother and gets Billy to admit it through sobs: He killed Erin. He says he’s ready to confess, but John wants to take him up to the family cabin one last time first… and as they pack up their tackle boxes, we see there’s a gun stashed in one of them.

As John drives a dead-eyed Billy up to the fishing spot, Mare heads to Lori’s to find Billy. Even though John told Lori to keep quiet, she spills everything to her pal Mare — including the fact that Billy is the father of Erin’s baby. (And he and Kenny are cousins!) Mare speeds off to the cabin, calling the chief on her way and telling him Billy is the killer. He tells her to wait for backup, but she just floors it. Just then, Erin’s friend Jess arrives at the police station to show the chief the photo she took out of Erin’s journals. We don’t see the photo, but whatever it is compels the chief to bark at someone to get Mare on the phone. It might be too late, though: Billy, clutching that tackle box, and John are fishing just as Mare approaches… and we’ll have to wait until next week’s finale to find out how it all ends.

Elsewhere in “Sore Must Be the Storm”: Mare opened up about Kevin’s death in therapy, revealing that he found him hanging in the attic and “no one goes up there” anymore; Richard wooed Mare with a gift basket of Rolling Rocks and hoagies (nice!), and when she said she can’t date him right now, he just told her to call him and ask him out when she’s ready; Colin’s mom slapped Mare across the face (twice!), blaming her for Colin’s death; Siobhan also raged at Mare in a drunken stupor and got a little too obsessed with her new girlfriend; and an overworked Carrie almost let poor Drew drown when she dozed off while giving the boy a bath. (An eventful hour, huh?)

So are we really super duper sure that Billy killed Erin? What about all these loose ends? And what are your predictions for next week’s big finale? Share ’em in the comments below.