Had Black Monday not returned for a third go, leaving Dawn in the slammer would have been a tragic way to bid this crew farewell. But not only are we being blessed with a new season (which kicked off Sunday on Showtime), we luckily didn’t have to wait long for The Jammer Group’s mastermind to get sprung.

By the end of the Season 3 premiere, Dawn Darcy found herself a free woman after being imprisoned for spearheading the stock market crash of 1987. But Dawn’s early release was far from the biggest shocker that went down in the 30-minute opener. What new scheme did Mo start brewing and which character was left fighting for his or her life? Let’s recap from the top.

When we pick back up, Mo has a new passion project as a jazz record producer, while Dawn continues hustling from behind bars. She’s working the portfolios of her prison guards, as other inmates scurry to meet her every demand.

The power dynamics between Blair and Tiff have completely reversed. “Skants” have taken off at Pfaffashions, so while Tiff is raking in the dough, Blair attempts to steady his feet in the world of politics. As the two discuss money (Blair has an allowance!) and fashion, Tiff is mid-coitus with her new boy-toy Giancarlo. Hilarious and awkward.

At the studio, Mo and Yassir discuss the house (and ring!) Mo bought. Yassir says that moving to the suburbs seems like “a cry for help,” but Mo replies, “It’s time for me to start making more than just money.” He sounds like a brand new man… until he caps off his newfound wisdom with a pube joke. 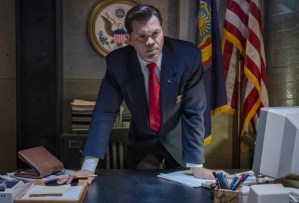 Keith and Larry meet with a prospect who’s considering going public, but the man is much less confident in the “Lehman brother” (singular) and “whatever you are,” he says, motioning to Keith. The deal goes south, but nothing seems to crush this new duo’s optimism.

Mo visits Dawn, who in jail is feasting on a five-star meal of lobster and wine. He tells her that interior design is hot on the street, and picks her brain on all things carpets and countertops. (She also makes a pube joke, for the record — “That’s what I said!” he exclaims). Mo tells her these months apart have helped him get his life together, and she agrees. For the first time in a long time, the two have actually connected. When he tells her not to get too comfortable in jail, she repeats that she doesn’t need his help to get her out. Is she hatching a plan of her own?

Mo’s next stop is Blair’s basement “office.” He wants the congressman to pardon Dawn, but Blair goes back on his word, since it won’t be a good look if he pardons his crooked ex-business partner. “I’m a very important congressman!” he declares, as multiple people enter his closet-sized office just to fart. Blair admits that everyone on the Hill hates him. He has no power whatsoever because he was appointed to a seat that was vacated by a man he “essentially f–ked to death.” Mo refuses to give Blair the designer briefcase he wants, and farts on his way out the door.

Dawn reads Stephen King’s novella, “Rita Hayworth and Shawshank Redemption,” and when the lights go down, she and her scary, murderous roommate are chipping away at the wall to dig an escape route. We learn the two women have a sexual history, and it seems this much larger lady may be the only person in jail that Dawn is afraid of. 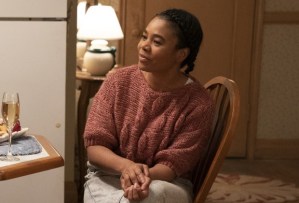 Larry is game for the plan but he wants collateral. If Pfaffashions goes public without a hitch, Mo’s jazz label stays his. But if something goes awry, Lehman Brothers will take ownership of Kokomo Co. With his options limited, Mo takes the deal.

When Mo heads back to the prison to propose, he learns that Dawn was already released. The escape plan was a fake-out, and with a little flirting, she not only got her cellmate to confess to being a serial killer, but recorded it for the cops, too. (She wasn’t lying when she said she didn’t need Mo’s help!)

At the grand opening for a sewage treatment center, Blair is sick and tired of playing games. He wants to make big changes in his life, and plans to take eeeeeveryone down with him. He steps up to the podium, but before he can get a word out, he’s shot down. The episode ends with Blair bleeding out on the ground.

There’s no way Blair is actually dead, right!? And will Mo lose his record label to Larry? Grade the premiere below, then sound off in the Comments!