American Idol has dimmed the lights for the last time this season with the crowning of the franchise’s 19th (!) winner.

Heading into Sunday’s finale, 49 percent of TVLine readers expected Chayce Beckham to be crowned the new Idol, with 28 percent predicting a win for Willie Spence and 22 percent believing that Grace Kinstler had a genuine shot at the title. But those numbers shifted a bit when we asked our readers which finalist they thought deserved to win; Beckham still came out on top, but Spence and Kinstler followed more closely behind.

So, how did those predictions pan out? Let’s get straight to the results: Midway through the three-hour event, Ryan Seacrest revealed that Kinstler would not be moving forward, making her this season’s official third-place finalist.

Following another round of performances (more on those below), Beckham and Spence met center stage to learn their fate. The winner of American Idol Season 19 is… Chayce Beckham!

Read on for a breakdown of the three-hour (!) finale, with official videos to be added when they become available:

ROUND ONE | Kinstler kicked things off with a characteristically bombastic performance of Celine Dion’s “All By Myself,” the first of several judge-picked songs of the night. Not that it was much of a risk, but they knew exactly what they were doing when they assigned her this iconic ballad — the emotions were real, the high notes were effortless and the moment was hers. I’m not sure I agree that “Celine’s going to have words” (no one out-Celines Celine, period!) but it was stunning nonetheless. Watch:

Next up, the judges tasked Spence with performing a tribute to his home state via Ray Charles’ “Georgia,” and what a blessing it was. The purity of that man’s voice! Uplifting and heartbreaking at the same time, this performance — like so many of Spence’s this season — transported us to another place. He took us to church and Georgia without breaking a sweat. With a voice as admirable as his personality, Spence continues to be an absolute delight. 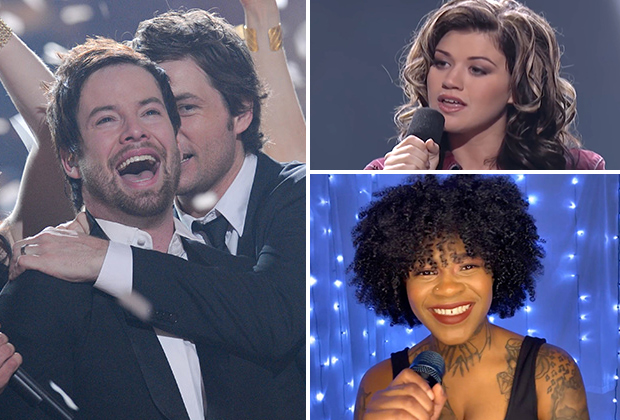 The Beatles’ “Blackbird” wasn’t the most exciting choice for Beckham, but it fit nicely with his gravelly voice. It wasn’t as challenging or impressive as the two songs that preceded it, but an extended grunt towards the end of the song was enough of a vocal moment to impress the judges, who loved what they heard.

ROUND TWO | Kinstler set the bar high in the finale’s second round, serving up a spectacular cover of Whitney Houston’s “I Have Nothing.” It may have been a relatively safe choice, but there was nothing safe about those high notes, which she crushed. Click here to watch.

Kinstler may have set the bar for this round, but Spence had no trouble pole-vaulting right over it. His chilling performance of Sam Cooke’s “A Change Is Gonna Come” was undeniable. Even Luke Bryan admitted that it might have been the best performance of that song ever seen on the Idol stage. And Katy Perry wasn’t the only person who got emotional watching Spence’s beautiful relationship with his mother. I was cutting onions over here, too! Click here to watch.

Following an emotional look back at the hard times that brought him here, Beckham then wrapped up Round 2 with another gritty performance, taking on Chris Stapleton’s “Fire Away.” Click here to watch.

ROUND THREE | Following Kinstler’s elimination, Beckham and Spence faced off in the final round of the night, for which they each revisited a song they performed earlier in the season. Beckham kicked things off with a refreshingly emotional take on Ed Sheeran’s “Afterglow.” He always brings the vocals, but this performance showed us how much heart he’s capable of infusing in his performances. It was the kind of impressive display that would justify his seemingly foregone victory. Watch:

Then again, Spence proved he deserves the title just as much (if not more?) with an incredible performance of Cynthia Erivo’s “Stand Up.” From the chilling lower beginnings to the bombastic climax, Spence told a powerful story, and it was a privilege just to enjoy it from my own home. Wow doesn’t even begin to describe it. Watch:

Even though one of them had already been eliminated by this point, the Top 3 each got their own all-star duets. Kinstler joined Alessia Cara on “Scars to Your Beautiful,” Beckham performed “Forever After All” opposite Luke Combs, and Spence teamed up with Leona Lewis for a stirring take on “You Are the Reason.”

And those were just a few of the finale’s special guests. Sunday’s send-off featured performances by the likes of Macklemore, Fall Out Boy, Chaka Khan and Sheryl Crow. Idol also welcomed back a handful of this season’s more memorable contestants, including Alyssa Wray, Graham DeFranco and the man, the myth, the legend… Murphy.

Bryan brought back Casey Bishop for a duet of Bon Jovi’s “Livin on a Prayer,” and Lionel Richie took to the stage for a performance of “One World” with even more beloved eliminated contestants, including Cassandra Coleman and Deshawn Goncalves. And don’t get me started on Perry’s beautiful duet of “Thinking of You” with Hunter Metts. Watch:

OK, let’s talk: Do you think the right singer won the season? And how did you feel about the three-hour finale? Grade the main event in our poll below, then drop a comment with your full review.