The last we saw of Black Lightning‘s eponymous hero, he was powerless and presumed dead after a brutal beatdown from Tobias.

The fate of Jefferson (played by Cress Williams) — as well as that of the Pierce family and the people of Freeland — will be revealed when The CW’s family comic-book drama comes to a close after four beloved seasons this Monday at 9/8c.

Salim Akil, the EP and creator behind Black Lightning, says he experienced a bittersweet goodbye while working on the finale, in part because he still doesn’t know if the network will greenlight the show’s potential Painkiller spinoff starring Jordan Calloway. But, he adds, he will know by Monday — the day before The CW reveals its 2021-22 slate.

Without giving too much away, Akil teases a series closer that welcomes back some characters and waves goodbye to others. It’s also a chance to restore justice to Freeland by opening a boxing ring of sorts for baddies such as Tobias (played by Marvin “Krondon” Jones III) to battle Black Lightning, if he’s still alive, or maybe even Painkiller.

Meanwhile, Chief Lopez (The Best Man‘s Melissa De Sousa) has a score to settle with Lightning. But which Lightning? Jennifer (played by China Anne McClain) or JJ (The Wonder Years‘ Laura Kariuki)? Fans will have to tune in to find out. “The whole process of doing the finale with the people that were there was the best part of it,” Akil adds. 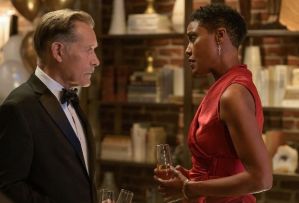 Had there not been a pandemic, Akil and the cast and crew would have celebrated the show’s farewell with a wrap party. But because they couldn’t, Christine Adams (who costars as matriarch Lynn Pierce) threw a small gathering in Atlanta, where the show shoots. “She opened up her home,” he says, adding they had all taken COVID tests, “and invited us over for a nice quiet celebration.”

And if Painkiller gets picked up, perhaps Akil will host the next happy gathering.