Warning: This post contains spoilers from Episodes 8 and 9 of The Underground Railroad.

For a lot of The Good Place fans, William Jackson Harper will always be synonymous with Chidi and vice versa.

So, it only makes sense that the actor would learn he had landed the pivotal role of Royal on Barry Jenkins’ The Underground Railroad (now streaming on Amazon Prime) while he was on a bus with the cast of the acclaimed NBC comedy, en route to its final Comic-Con panel in 2019.

“My phone rang and my agent called,” Harper recalls for TVLine. “And usually, when my agent is calling, it’s to hop on the phone to take care of some business, or I’ve gotten a job. If I don’t get a job, I don’t hear anything. But she told me that I got the part.

“Usually I don’t take calls in front of people just because it’s rude. But once the whole bus saw that I was getting on my phone, everyone went silent,” he adds. “And I was like, ‘Y’all, I just booked The Underground Railroad.’ And everyone was like, ‘Whoa! Yo! Oh, wow!’ It was a whole thing.”

Once he secured the gig, Harper read Colson Whitehead’s Pulitzer Prize-winning novel, which Jenkins adapted, and readied himself for the journey. It’s a narrative journey that boldly breaks down all the horrors of slavery while also intertwining the self-liberation of enslaved Black people. And there’s an actual subterranean train system that mystifyingly helps the enslaved escape to freedom. 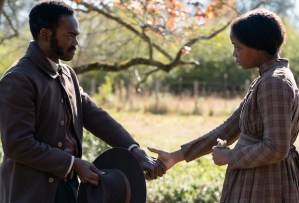 Royal, whom Harper plays, is a free-born Black man who helps get passengers to and from the train and as far North as possible.

“I’d known about the book for a while but I sort of avoided it because these types of stories affect me,” Harper confesses. “And then I got the part and realized I should read it.”

That’s when Harper learned that although Royal is an amazing man who helps the story’s protagonist (played by Thuso Mbedu), Cora, love herself and others more, he is also a Black man in pre-Civil War America who dies violently at the hands of insecure white supremacists.

“I wasn’t too mad about where his story goes,” Harper says. “In a lot of the narration in the book, Royal is described as being something that Cora hadn’t seen before and having an easy way about him — that really told me how to approach the character. It was really useful to make sure I landed on something that Barry and I were really comfortable with doing.” 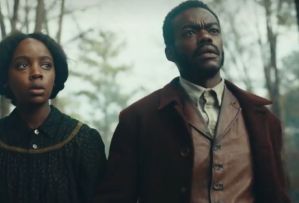 Royal’s murder, which takes place when the farm is ambushed, is tragic. But because Cora and Royal had been planning a future together, the loss of his life is also painfully convincing, Harper says.

“There’s something really truthful about the way Royal’s death unfolds,” he reflects. “The effect of Cora not really having any time to mourn is realistic because life feels like that sometimes. It’s the most effective way to bring his story to a close, and it’s the way it unfolds in the book, too. There is no closure and he’s just gone, and there’s something about the brutality and the flipness of it that feels like real life. It hits in a different way when you don’t have a drawn-out goodbye. The person is here, and then they’re not.”

Given the subject matter and the way it impacted even him, Harper says he understands why some viewers are reluctant to watch The Underground Railroad. However, he hopes that the discourse the drama inspires outweighs the trauma that is depicted.

“I never talked to the on-site therapist, but I did find it really triggering when we were doing the assault on the church,” Harper divulges. “I found myself almost blacking out with anger. When I run out the front door of that church and I attack one of the marauders, I remember going out of my head for a second. It oddly felt a little too real. 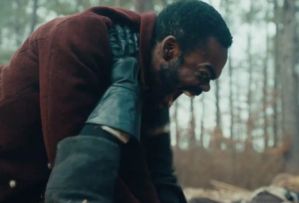 “The actor was outfitted and he felt totally safe that my little ass couldn’t really hurt him. But I was angry and I felt like I was going to lose control,” he adds. “Maybe I should have gone and cleared my head. Barry yelled ‘cut,’ and we all shook it off and I was reminded, in that moment, that we’re all on the same team telling this story because we think it needs to be told.”

It’s a perspective that demands to be shared and unpacked, he concludes.

“Take care of yourself. If this is not the kind of story that you want to watch right now, don’t,” Harper says. “As a people, we’ve come through a lot. But what makes this story feel different, is that at its heart, it is a story about resistance instead of endurance.”

“The Black characters have agency and they are in control of what they are doing and that feels different to me,” he surmises. “A lot of white people want to believe they would’ve been abolitionists but that’s just not true. I’m hoping that this story brings those conversations to the forefront.”