The only story centering two Black queer women that comes to mind for Master of None actress Naomi Ackie debuted 35 years ago.

“It’s mad. When you kind of think about the amount of TV that we observe, and when you really check it, we haven’t really had many of these stories for and about us,” the Star Wars: Episode IX — The Rise of Skywalker co-star tells TVLine. “The only story that I could think of is The Color Purple. That’s the only one I can think of.”

That will change when the Netflix comedy returns this Sunday after a four-year hiatus for Season 3, which focuses on Lena Waithe’s Denise and her wife Alicia, played by Ackie. Aziz Ansari, who co-created Master of None and stars as Dev, will take a backseat narratively. Instead, he co-wrote the installments with Waithe and directed them all. The end result is a quiet and engaging look at a lesbian couple as they struggle to stay in love, remain faithful and have a baby while living on a picturesque farm in upstate New York.

“I’ve always been really into exploring different ways to perform, and Master of None felt like a switch for me to give a really naturalistic performance,” the British actress says. “And once I knew that the story was going to be surrounding this queer couple and their marriage, I thought, ‘Wow. That’s something that I’ve never done.’ It felt like a great challenge, but also a great way to normalize queer relationships on TV.” 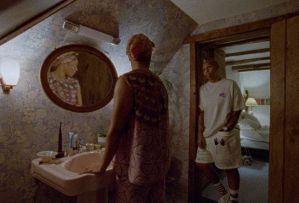 “This whole endeavor was pretty refreshing, and I’m just proud that I could be a part of something different,” Ackie adds. “It’s exciting because it’s just as educational about the IVF side as it is about these two Black queer women.”

In the five-episode season’s more loving moments, Denise and Alicia can be seen dancing, having friends over for dinner and even playfully folding laundry. But when dishonesty and disappointment come into play, the two are shown yelling and arguing to get their individual points across and be heard. From an artistic perspective, Ackie says those were her favorite moments to shoot.

“I really like the argument scenes because we’re both Black women but from different parts of the world,” Ackie gushes. “Our accents are different, but the energy is the same because we’re both Black. It’s quite fun to watch. There’s something kind of fun to hear the colloquialisms come out when people grow angry. All of a sudden, you hear my South London side emerge, and all the softness goes away. I never realized it until I watched it that no matter where you’re from as a Black woman, all the gestures are the same.” 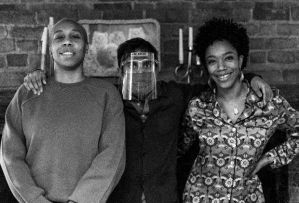 Ansari’s desire to make every moment feel as authentic as he could makes Ackie (who will next star as the late, great Whitney Houston in the biopic I Wanna Dance With Somebody) excited about the future. For instance, Ansari and Waithe reworked the scripts at times to suit both actresses’ voices, with each installment encompassing a vignette vibe.

“It’s honest, and all of that felt like a celebration, and I just didn’t feel like at any point, I needed to hold back,” she reveals. “There have been times on other projects that I felt like I was acting and putting on a character, and it didn’t feel like that for Master of None.”

“It felt like I was just being me with a different name,” Ackie reveals. “I was in Star Wars, but it wasn’t like this. I’m just playing a human being.”