Who Killed Sara?‘s Alex spent nearly two decades behind bars, exalting his sister as a saint in his mind.

But that image of Sara came crashing down when Alex found Sara’s hidden journal and read it in the Season 2 premiere of the addictive and soapy Netflix series, which dropped this Wednesday. Titled “The Two Faces of Sara,” the installment kicked off with a flashback of Sara having a psychotic break and attacking her mother and best friend, Marifer, before casually sauntering off to hang out with Alex and Rodolfo as if nothing had happened.

Upon learning this, Alex not only questioned how well he knew his sister but if she had enemies and victims who might have wanted to kill her. Alex even paid a visit to Sara’s psychiatrist, who told him about an incident in which Sara started exhibiting psychopathic behavior as a child and nearly killed a little girl who was attending her birthday party. 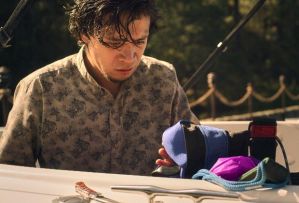 Alex also visited Rodolfo, who was wearing a ridiculously funny swim cap, and asked if he knew how mentally ill Sara truly was. But Rodolfo didn’t want to hear the truth and yelled that Sara was perfect to him before demanding that Alex and his “facts” be gone. Speaking of facts, apparently Elroy didn’t cut Sara’s parasailing straps after all. He was going to, but then Nicandro showed up and he dropped the knife, which Nicandro picked up. Hmm. Maybe Nicandro cut the straps. But why would he? Dun, dun, dunnn.

Potential suspects and motives aside, Who Killed Sara? is a tale of revenge. And even though Alex knows now that his sister was troubled, he still wants to get more answers and avenge her death. To that end, he made plans to meet up with a very shady Sergio at Cesar’s amusement park. Of course, the whole thing was a set-up and Sergio brought along Cesar to take down Alex. Ever the wisenheimer, Alex anticipated the double-cross and showed up early with an attack plan and explosives. 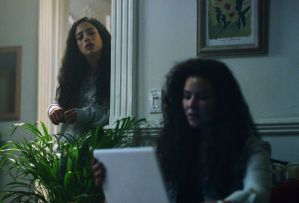 The only problem is that neither Cesar nor Alex expected Elisa to show up unannounced, and when she chased after Alex, the explosives went off and suddenly her life was in danger. What will become of Elisa? Talk about a cliffhanger.

Another new twist? Marifer and Clara are sisters and Clara is having Chema’s baby as his surrogate as a part of Marifer’s vengeful strategy or something like that. It’s unclear. What is clear is that Season 2 of Who Killed Sara? promises to be just as crazy if not more so than Season 1. Let’s just hope they finally reveal the identity of Sara’s murderer amid the madness. (That is, if she’s actually dead!)

Give the Who Killed Sara? Season 2 premiere a grade in our poll, then drop your thoughts in a comment below.