Motherhood in all its forms is a major theme on The Underground Railroad.

Just as she does in Colson Whitehead’s Pulitzer Prize-winning book, Cora spends the majority of Amazon Prime’s limited series either agonizing over her mother Mabel’s abandonment or seeking and giving the maternal love she lacked growing up. (That is, when Cora’s not fighting to self-emancipate, of course.)

This theme and Mabel’s fate are further explored in the finale for Barry Jenkins’ adaptation, which is now streaming. As readers of the book know, the reason Mabel ran away isn’t explained; she basically packs a bag and midway through her escape has second thoughts, and attempts to come back. But Jenkins takes the story a step further and fleshes out Mabel’s motivations by turning her into an overwhelmed midwife.

Things fall apart when Polly, another enslaved Black woman forced to live and work on the Randall plantation, gives birth to her second stillborn baby. Mabel is worried about Polly’s mental state but her husband Moses and Connelly, the plantation’s overseer, urge Polly to keep it moving by nursing a pair a twin babies whose mother died in childbirth.

At first, Polly seems fine. But then she begins to call the babies her own and Mabel warns Moses and Connelly that Polly is not mentally stable. They ignore Mabel’s pleas and warnings and even slap her and then the worst happens. Polly murders the babies and then takes her own life. Although Jenkins never shows their violent ends up close, the bloody aftermath still has a devastating and depressing effect. Slavery being the oppressive practice that it is, Connelly punishes Moses and blames him for Polly and the babies’ deaths and Moses is tied to a post and whipped. 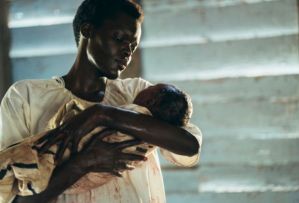 Overwhelmed by the preventable loss of life and the injustice literally heaved upon Moses’ shoulders, Mabel snaps and just walks off of the plantation. Before she leaves, Cora asks is she can come with her but Mabel is too angry and frustrated to communicate effectively with her young child.

Mabel walks and walks and she’s wading through the swamp before she realizes that she needs to get back to the plantation and take care of Cora. But the realization comes too late and a poisonous snake bites Mabel and claims her life. She falls into the lake and drowns and Cora never learns what really happened. Cora is instead shown sitting on the porch as a kid, waiting for a mom who can never return.

Ridgeway, the slavecatcher tasked with finding Mabel, also never learns the truth and dies thinking that she ran away to Canada. Although Jenkins fills in Whitehead’s blanks, Mabel still suffers the same tragic fate and poor Cora never gains a sense of closure that only the facts can provide. Fascinatingly enough, Cora and Caesar dodge a similar killer snake when they escape to freedom in that same swamp in Episode 1. 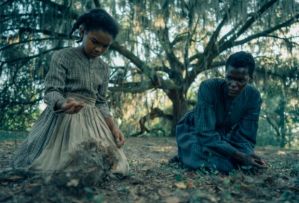 Despite the tragedy of not knowing what really happened to Mabel, something hopeful does happen for Cora — she takes a newly orphaned Molly under her wing. And just as she did for Grace aka Fanny (a character Jenkins created in part to give Cora someone to mother in that North Carolina attic), Cora looks out for Molly and protects her. By finale’s end, Cora and Molly seek a fresh start by hitching a ride with a Black man who has a horse and covered wagon heading west. Mahalia Jackson’s “How I Got Over” then plays over the end credits and ties the whole story together from beginning to end.

Give The Underground Railroad finale and the limited series a grade in our poll, then drop your thoughts in a comment below.