If we didn’t have a clear picture of what the Season 20 finale of The Voice was going to look like before Monday’s Semi-Finals — and we kinda did — we sure did afterwards. It was going to be a two-contestant race between Team Blake Shelton’s so-good-I’m-running-out-of-superlatives Cam Anthony and Team Kelly Clarkson’s young old-school country boy Kenzie Wheeler.

But who would be joining them, competing for third fourth and fifth place? Based on Monday’s performances, singing for the Wildcard Instant Save Tuesday would be Team Nick Jonas’ Rachel Mac, Team Kelly’s Corey Ward, Team John Legend’s Dana Monique and Team Blake’s Jordan Matthew Young (not because he’d done poorly but because Cam was obviously going to advance). Unless Dana launched another fireball like “Free Your Mind,” I reckoned Jordan would win the fifth slot in the finale. 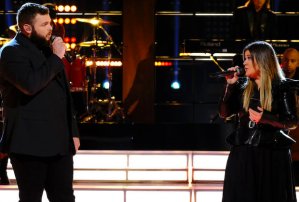 Of course, that was all pre-show prognosticating. Who actually wound up having to sing for the Save — and who scored it? Before we found out, Season 17 winner Jake Hoot teamed up with his former coach for the perfectly pleasant ballad “I Would’ve Loved You” (which I’d have sworn built up to two or three endings before it was finally finished), and Aussie rapper Masked Wolf performed “Astronaut in the Ocean” surrounded by more fire and FX than you’ll see this side of the Eurovision Song Contest. Then, in the moment(s) of truth…

Pia Renee (Team Legend), “Everything I Wanted” — Grade: C+ | Ordinarily, there’s a comfort level listening to Pia — I never worry that she’s gonna go off the rails. Here, however… well, she kinda did, running afoul of a note or two that actually made me wince. Not at all the way anyone would’ve wanted a performer as polished as she is to go out.

Corey Ward (Team Kelly), “Iris” — Grade: C | OK, Corey has his schtick, and by God, he was going to stick to it to the bitter end, ripping out his heart on one last number. This was more successful than his performance Monday night but not so much more successful that I thought for a minute that he’d be going to the finals. Angst can only take you so far. 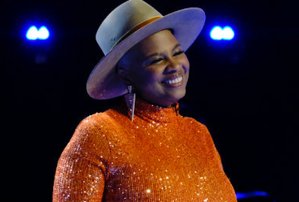 Dana Monique (Team Nick), “Caught Up in the Rapture” — Grade: B- | Oh, Dana, no — not a ballad when singing for your life! To her credit, she sounded pretty good, but this was by no means Dana at her electric best. She needed to explode, and this was sorta a mild sparkle — and rather a leaden one at that. Sigh.

Jordan Matthew Young (Team Blake), “Drift Away” — Grade: B+ | See above: No, Jordan, not a ballad. However, if he did feel the need to go midtempo — and apparently, he did — at least his Dobie Gray cover had some energy to it and let him turn loose his rollicking rasp now and then. Yeah, if Gihanna Zoe tripped up, like, at all, this could send him sailing into the finale.

Gihanna Zoe (Team Kelly), “Someone You Loved” — Grade: B | Gihanna got off to a pretty good start and quickly deployed the cry in her voice that’s become her hallmark. Maybe remembering Kelly’s past advice, she also left room to grow as the Lewis Capaldi hit went on. Not a home run, but this would definitely get her on base. That said, I preferred Jordan’s performance and suspected that viewers would, too. And did they?

So, what’s your take on the Final Five? And which of the eliminated contestants are you sorriest to see go? Vote in the poll below, then hit the comments.